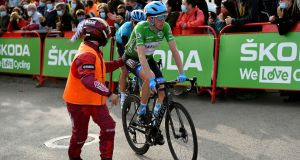 Daniel Martin Team Israel Start-Up Nation gets back on his bike after a crash during stage five of the Vuelta a Espana. Photo: Justin Setterfield/Getty Images

Huy! Just when it seemed Dan Martin hadn’t broken much sweat for the day and was ready to roll over the hilly finish line at Sabiñanigo he suddenly found himself tangled up in blue – as in the bikes and jerseys of two riders from team Astana and Movistar.

It wasn’t so much a crash as a minor collision, only enough to leave Martin sweating it out for couple of minutes on the ground while the bikes and riders were untangled, neither, thankfully, badly scratched. Martin’s gently vexed look said it all.

Saturday’s Stage 5 finish of the Vuelta a España was otherwise relatively straightforward – Belgian rider Tim Wellens first home out of a three-man breakaway that had been out in front for the last 70km - and because Martin’s spill happened with around 500m to go, on the last twisting turn, he was given the same time as the main group that came in behind, though race leader Primoz Roglic did originally gain a few seconds in outright fourth, the rest finishing two minutes and 17 seconds behind Wellens, the 29 year-old from Lotto-Soudal.

Martin’s got some help from his team Israel Start-Up Nation riders to remount and then rolled over four minutes and five seconds down, in 64th place, still not looking at all pleased about it. There was some delay before the General Classification was updated, and how exactly the lapsed times would be applied, but as expected all that main group, Martin included, were credited with the same time as Roglic (+2:13), which made perfect sense given Martin was poised to roll over alongside him.

Being credited with the same time means Martin still sits second overall behind Roglic, team Jumbo-Visma’s defending champion from Slovenia, by just five seconds, with Richard Carapaz, the Ecuadorian rider from team Ineos Grenadiers, still sitting in third, 13 seconds back, but he did lose his king of the mountains classification to Wellens.

However, Martin did concede some points to Roglic in the green jersey classification, which the Slovenian was leading, and now trails 79 points to 57, the same as Carapaz, though Martin gets to wear the green jersey for another day as he’s ahead on the GC.

“Rest assured,” Martin told his team management as he boarded the team bus, “I am just fine.” Part of the initial worry was that Martin had started the Tour de France with a fracture in his sacrum, sustained at the Critérium du Dauphiné in early August, but no damage was done this time fortunately.

Sam Bennett also rolled over the line safely in the next main group that finished 12:49 down, in 136th place, his legs clearly none the worse off from Friday’s Stage 4 win into Ejea de los Caballeros.

Up to that spill at the finish the only notable sweating was among the trio of breakaway riders, Wellens joined by the 20-year-old Dutch rider Thymen Arensman (Sunweb), and Guillaume Martinthe, 27-year-old from France (Cofidis). The trio’s lead opened to 4:39 up the climb at Alto de Petralba before the fast descent, then last little uphill, to the finish.

The 185.5km from Huesca had started out fast, averaging 50.1km/h trying to create a breakaway, and once the trio got away it seemed the main peloton were content to let them go, with three categorised climbs in the final 75km, the main leaders thinking more about Sunday’s Stage 6 finish.

From Sabiñanigo, in the north eastern province of Aragon, Sunday’s stage heads straight for the rugged terrain south of the main Pyrenees; 146.4km, two intermediate climbs along the way, it was originally meant to France for a summit finish at the Tourmalet, but Covid-19 rules forced La Vuelta to re-route the race on Thursday

The stage will now take the Alto de Petralbo, Puerto de Cotefablo, before a summit finish at Aramón Formigal, the largest ski resort in Spain, which is no Tourmalet, and no harm, especially given the little shake Martin may have got on Stage 5. The best way to stay out of trouble may be to stay at the very front.