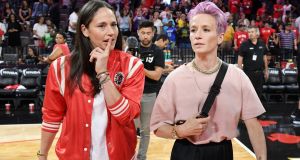 During the 2019 Women’s World Cup, a video clip aired of Megan Rapinoe saying she would never bring the trophy to the White House if the United States won. Inevitably, this prompted President Donald Trump to call her out online with a three-tweet blast that mobilised the full might of the Fox News right-wing outrage industrial complex. At which point, Sue Bird, Rapinoe’s partner and one of the greatest female basketballers ever, wrote a piece for The Players’ Tribune, entitled, “So the President f**king hates my girlfriend”. A very 21st century soap opera.

“What’s it like to have the literal President of the literal United States (of literal America) go Full Adolescent Boy on your girlfriend?” asked Bird. “Hmm. Well….. it’s WEIRD. And I’d say I actually had a pretty standard reaction to it: which was to freak out a little….I mean, some of it is kind of funny….. but like in a REALLY? REALLY? THIS GUY??? kind of way. Like, dude – there’s nothing better demanding your attention?? It would be ridiculous to the point of laughter, if it wasn’t so gross.”

As Trump discovered, Rapinoe and Bird don’t suffer fools. Largely, because they don’t have to. The very definition of a power couple, they won’t kowtow to anybody. As competitive and compelling as they have both been individually in their different arenas, together they are proving an even more formidable force. Aside from breaking new ground, posing for the cover of ESPN The Magazine’s Body issue or fronting a television commercial for life insurance, they are also determined to use their social capital to effect real change, embracing progressive causes with gusto.

While most of her World Cup-winning teammates were negotiating lucrative moves to the English Women’s Super League over the past couple of months, Rapinoe was in Orlando, living in the bubble that the WNBA constructed in order to play out its season. While cheering on her girlfriend winning a fourth title with the Seattle Storm, the US captain decided to highlight a disturbing part of her fan experience, noticing the imbalance in how little attention the league gets. Especially when compared with the blanket coverage afforded herself and her own sport.

“And I guess I just have to wonder, when I see the millions of viewers we’re getting, and the shine on SportsCenter, and the talk show appearances and the endorsement deals and all of that,” wrote Rapinoe. “Where’s that same energy for the best women’s basketball players on the planet?? Where’s that energy for the women’s sports that - instead of scanning cute and white and straight - scan tall and black and queer??”

Just over a year after her own squad (which even she admits is not nearly as diverse as it should be) came home to a reception so rapturous many heralded it a breakthrough moment for women’s sport in America, Rapinoe witnessed the denouement of the WNBA season struggling for the oxygen of publicity. Although the situation was made worse by being in direct competition with the delayed men’s finals, she realised the hype around the World Cup had been just that. If the prevailing wisdom about getting girls into sport is “if she can’t see it, she can’t be it”, there is something seriously wrong with this picture.

“Soccer players generally are cute little white girls,” said Sue Bird, backing up Rapinoe’s comments in an appearance on CNN last week. “And I think basketball players, we’re all shapes and sizes. It’s 70-80 per cent black women, a lot of gay women. We’re tall, we’re big…People are quick to talk about it, judge it, put it down. And soccer, you just don’t see that just based on how they look.”

Winner of four Olympic gold medals with Team USA, Bird is 40 and, for nearly two decades, has been one of the most dominant athletes in any sport yet enjoys a fraction of the fame afforded Rapinoe and a host of other female soccer players. The same could be said of two generations of her peers on the basketball court. It’s difficult to think their failure to gain the acclaim they deserved is just down to race (Bird is white) or homophobia given the fact Rapinoe and Abby Wambach, her predecessor as the women’s soccer talisman, were both openly gay.

There are other factors at play. In an overcrowded American sports marketplace, the WNBA, perhaps because it’s lost about $10m a year for most of its 24 years in existence, has always skimped on spending to increase the profile of its finest performers. Critics point out its most coherent marketing strategy often seemed to be desperately advertising the fact NBA players actually watch the women’s games. Cathy Engelbert, the new commissioner, has promised to change that and she has plenty of material to work with.

These are women who, this past summer, formed their own Social Justice Council and, among other initiatives, went to war with Kelly Loeffler, an arch-conservative Republican senator from Georgia who also owns the Atlanta Dream, a team in their own league. After Loeffler slammed the WNBA for participating in “Black Lives Matter” and pushing the case of Breonna Taylor, the players started to campaign on behalf of Reverend Raphael Warnock, the Baptist pastor trying to unseat her in next month’s election.

Supreme athletes determined to make a difference on and off the court. Women with stories to tell. If only more people would listen.