Cycling’s Grand Tours have taken on new meaning this year 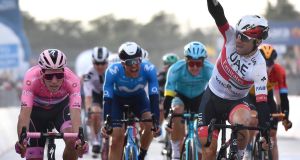 Some were last seen properly battered, some just badly bruised, others appearing to simply vanish overnight in what later proved suspicious circumstances. And then there were 143...

These are strange and unprecedented times alright, old Hercule Poirot himself probably questioning his little grey cells and order and method as to what might happen next in this year’s Giro d’Italia. Or indeed understand why it’s becoming a sort of metaphor for sport and for life in this second wave of Covid-19.

Bicycle racing has always been a game of mystery and of chance, one pedal stroke drawing back while the other advances. With the possible exception of the Grand National or the 24 Hours of Le Mans, few sporting events start out with greater uncertainty around those who will finish more than the three Grand Tours of cycling, only this year they have brought a little more risk and also hope.

The 2020 Tour de France is already looking like the first great sporting miracle of the pandemic – postponed by two months and still finishing in the right place and at the right time after three weeks of racing, 58,000m of climbing, 3,482km of road and not a single positive case of Covid-19 among the 2,800 tests carried out on riders. Not forgetting the Alps and parts of southern France were a complete washout just two weeks later.

Some people are surprised the Giro has made it as far as Friday’s Stage 13 finish into Monselice – which for one day at least has been lucky for everyone. Of the 176 riders that started out in Palermo last Saturday week, only 143 started the stage, and all 143 finished. Two of the 22 teams also pulled out after one of their riders tested positive for Covid-19 last Monday, although Team Sunweb rider Michael Matthews has since returned two negative tests, which even by cycling testing standards looks odd.

Italy got their fourth stage win of the Giro too thanks to Diego Ulissi of UAE Team Emirates, who also won Stage 2 into Agrigento, finishing just ahead of Joao Almeida, the 22-year-old Portuguese rider from Deceuninck-QuickStep who now has a 40-second lead and despite looking the most unlikely of leaders when taking over on Mount Etna on Stage 3 is still sitting pretty in pink.

Where are we now? Before Stage 13, the 192km from Cervia to Monselice in the northeast of Italy, there appeared to be some dissent among the peloton, perhaps even a different code of omerta. Whatever about the risk of continuing in the face of the virus few riders appeared willing to speak out on it.

Some had their say and moved on too: Monday’s second rest day shook up things when two riders tested positive – Matthews from Team Sunweb and Steven Kruijswijk from Jumbo Visma – as well as six team staff members, including four from Mitchelton-Scott. Having already lost Simon Yates after he returned a positive test after Stage 7, Mitchelton-Scott withdrew, as did Jumbo Visma, one of their riders, Jos Van Emden, warning RCS Sport (who organise the Giro) and the UCU (the governing body of world cycling) that that bubble around the race was in danger of being burst – or some words to that effect.

So RCS and the UCI carried out another full round of tests on Thursday evening. None came back positive. Another team, EF Pro Cycling, wrote to the UCI and RCS Sport requesting the race be stopped on Monday, the second rest day, rather than risk any more rider or team withdrawals in the last week due to Covid-19; Thomas De Gendt also said his Lotto-Soudal team had debated pulling out of the race before the start of stage 12.

In parts though the Giro has proved again to be the most impassioned of Grand Tours; last Saturday’s Stage 8 win at Vieste for Britain’s Alex Dowsett of Israel Start-Up Nation, Tuesday’s Stage 10 victory at Tortoreto for Peter Sagan, both delivered as if it were their first and last, as well they might. Adrenaline never goes out of style.

Still there is extra fear that a lot fewer than the 143 riders who remain will make the finish in Milan on Sunday week, especially given there are other obstacles in the way. Towards the end of next week Stage 18 reaches the race’s high point over the Stelvio, at 2,758m the highest paved mountain pass in the Eastern Alps, Stage 20 next Saturday also ascending the 2,744m of the Colle dell’Agnello, where the change in the weather is known to be extreme. Plans for a stage detour are already in place.

By then, the 75th edition of the Vuelta a España will also be under way, starting in the mountains of the Basque country next Tuesday, with Sam Bennett looking to pick up where he left off in Paris and chase some individual wins and possibly another points classification jersey. Dan Martin will also be riding his second Grand Tour of the season and around some familiar terrain too, and there is hope for one of them to stand on the stage podium.

Slightly shortened already to 18 stages, given the original start and three stages in the Netherlands were abandoned, the Vuelta is due to finish in Madrid on November 8th, the same city where last Sunday Spanish prime minister Pedro Sánchez declared a state of emergency to keep the region in partial lockdown.

The Vuelta hits the high mountains early too, the 135km jaunt of Stage 6 featuring three major climbs and finishing atop the Col du Tourmalet, in the French Pyrenees, which has been snow-capped for a couple of weeks already. Stage 12 also takes in five categorised climbs, including the dreaded Angliru.

Unlike perhaps Gaelic games and some other sports questioning their immediate future in the face of Covid-19, riders in the bubble of the Grand Tours probably aren’t a great danger to anyone other than themselves, but that risk and hope of being in a race where no one is exactly sure where it will finish is something maybe we all share.