Dan Martin toasting another stage win at the Vuelta 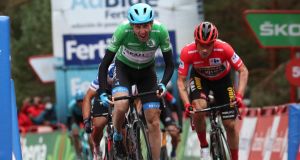 Hunger or thirst never goes out of style in cycling. Nine years after his first stage win in the Vuelta a España, over two years after his last win anywhere, Dan Martin found himself back on top of a race podium, the satisfaction in no way concealed behind his face mask.

Indeed stage 3 started out riding through Rioja wine country and Martin was the suitable toast at the finish, first up the brutally hard summit at La Laguna Negra and with that landing his second stage win in the Vuelta, and the promise of more to come.

For the third successive day it was another hectic finish among the main contenders – or rather those who could handle the testing mountainous terrain of northern Spain – and this time Martin timed his final effort to absolute perfection, jumping off the front inside the last 200m to secure the bike length win from Primoz Roglic and Richard Carapaz, all three given the same time.

Irish cycling has become familiar with a rider winning a stage of a Grand Tour in the green jersey after Sam Bennett’s heroics in France last month, and indeed this felt like Martin’s time and turn – the Irish rider also wearing green for the stage, as Roglic and Carapaz already had a different jersey on their back.

“I’ve come so close to winning this year, I just really wanted to win a stage for this team because they’ve been so good to me,” said Martin, sharing the toast with his team Israel Start-Up Nation, and also his wife Jess and twins Daisy and Ella.

It was his first outright win anywhere since the 34-year-old Martin captured stage 6 of Tour de France in Mûr de Bretagne in 2018; his previous stage win in the Vuelta was back in 2011, when he was first to the stage 9 finish at the La Covatilla resort in the mountains of Salamanca.

It’s still a very long way to Madrid on November 8th, but this trio of riders continue to lay down a marker. Third in the first two stages, Martin also gets a 10 second time bonus for winning the stage, and now trails Roglic, team Jumbo-Visma’s defending champion from Slovenia, by just a mere five seconds, with Carapaz, the Ecuadorian rider from team Ineos Grenadiers, still sitting in third, 13 seconds back, and still the leading of the king of the mountains classification.

Like Bennett, Martin is riding his second Grand Tour, just over four weeks after finishing on the Champs-Élysées, although he went into that race with a fracture in his sacrum, sustained at the Critérium du Dauphiné in early August.

“Obviously with the [back] injury at the Tour, I couldn’t win a stage but I was really determined to win a stage today,” he added. “The team were amazing, and every single one of them played their part in the victory.

“The sponsors have supported us all through Covid, Sylvan Adams and Ron Baron the owners, there were no salary cuts or anything like that. The team were really motivated during lockdown because of that, to train harder. This win is partly for them and then partly for my wife because this is the first time I’ve won a race since my kids were born and it’s really special.”

Martin also now moves into second overall in the green jersey win, getting 20 points for the stage win, and now has a total of 57 points, to Roglic’s 65, and for now at least very much in the hunt for that jersey outright, if not the leader’s red jersey too.

Although the final 7km climb up La Laguna Negra wasn’t the hardest in the world, the last kilometre was properly brutal, a mixture of wet tarmac and in parts loose gravel, but a climb cut perfectly for Martin. The stage 3 route from Lodosa to La Laguna Negra, 166.1 km in all, did witness a few breakaway efforts, but the main peloton were all together going into the last 20km, Martin’s experience also showing as he only once moved to the front, and that was to take the stage win.

Bennett took his time on the day, finishing 12 minutes and six seconds down, in 146th, given what comes next: Friday’s stage 4 is now one for the sprinters, the 190km from Soria to Ejea de los Caballeros. The second half takes place on the open plains northwest of Zaragoza, where crosswinds could pose a threat, but normally a bunch sprint is inevitable, with Bennett poised to make his first press for a stage win. After three days in the mountains, he is hungry for the flat.