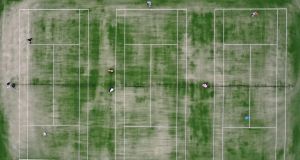 You have to think the board of Tennis Ireland (TI) are feeling this week how the board of Hockey Ireland (HI) were feeling last week. You, have dotted all your Is and crossed your Ts. You are open and transparent about wishing to provide safe sport to members.

Your board feels the sport has a strong case and you go public. Then, less than 24 hours later you get the phone call and there’s humble pie to eat.

It’s not so much sport and politics don’t mix. It is more that there are times, even when decisions appear to make no sense, when you just shouldn’t try to mix them. In the end the politicians will respond to what they mostly respond to, the greatest pressure. That’s when the plan gets poxed.

Tennis held a board meeting on Wednesday evening and reckoned a particular reading of the regulations allowed for them to keep clubs open under strict regulations and they stood up their case quoting from the Government framework.

In their justification for remaining open they listed three points. The first was that within the framework only gyms, leisure centres and swimming pools have been specifically asked to close.

Secondly, clubs need to open to meet the requirement that states “non-contact training can continue for school-aged children outdoors in pods of 15.”

Thirdly, within the social and family gatherings of the framework, it states: “It is possible to meet with one other household in an outdoor setting, which is not a home or garden such as a park, including for exercise.”

In their own protocols tennis says that singles play is only allowed on a casual basis for exercise purposes only. So two and two equals a couple of club players hitting a ball over a net. But was it a prohibited, organised outdoor gathering?

What tennis didn’t factor into the initial calculation was the politics of their decision and the current mood of the Government. It didn’t factor in where the most pressure would come from, which in hindsight, was plain enough to see.

Had tennis been allowed to keep their clubs open for members then golf would say to John Treacy ‘dude it’s 200 acres out here’ and sailing would wonder what the chances are of Annalise Murphy out in Dublin Bay on her Laser Radial becoming a super spreader?

Tennis courts remaining open would have been a mental and physical joy for many but would also have undermined Government policy and the numbers game of curbing human collisions over the next six weeks. Tennis clubs remaining open for tennis exercise and the house would have come tumbling down. That was the pressure.

Last week hockey received a similar type of phone call to the one received by tennis. The call emanated from Sport Ireland via Government Buildings via Cork, where three of the most powerful Ministers in the country, Taoiseach Micheál Martin, Minister for Foreign Affairs Simon Coveney and Minister for Public Expenditure and Reform Michael McGrath happen to live.

Hockey also had its Is dotted and Ts crossed when it threatened three clubs from Cork to turn up for their fixtures in Dublin or face sanctions, which began with a 5-0 defeat against their name and rose to expulsion from the competition.

However, Cork C of I, Cork Harlequins and UCC dug their heels in arguing against travelling on health and safety reasons and an adherence to Government guidelines. They would remain inside their own county.

The ultimatum from HI arrived a few days after the letters had landed on political desks. HI were simply trying to run a competition going by the rules as they saw them, just as TI were doing. But the outcome driven clubs saw the political route as best for them.

One letter to Minister McGrath pointed out that the club’s ladies team included four frontline professionals, adding one of their players had recently tested positive for the virus.

Another letter asked: “As you are aware government guidelines state that in Level 3 you are not to leave your own county. What happens if we get stopped on the road by the Gardaí? You have a 38-year old man in one car a 44-year old woman in another car trying to convince a Garda that they are elite athletes.”

Minister McGrath contacted the Minister of State for Sport Jack Chambers, who put in a call to Sport Ireland. Sport Ireland contacted HI and within a nanosecond club hockey in the Republic of Ireland was relegated from its elite status and the National Hockey League was postponed. Problem solved.

Nphet and Chief Medical Officer Dr Tony Holohan has found how dealing with political forces can be tricky. And hallelujah that he had the medical capability at hand to remove the knife from his back. Both science and sport is now struggling in an unfamiliar political world.

But the reality is that sport need its ministers as much as minsters need sport. Governing bodies rely on backing to get their athletes to places like Tokyo next summer and for their emerging young tennis players. In that equation goodwill on both sides must pertain.

Comprehend the decisions or not, that’s the politics.