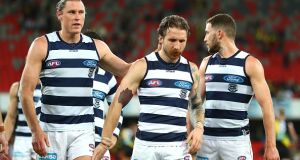 After more than 100 days of strict lockdown, Coivd-19 restrictions are finally easing in Melbourne. Since July, those of us not deemed essential workers have been permitted out of our homes only to shop for food and medicine and for an hour of exercise.

In August, as coronavirus cases spiked, the constraints tightened: an 8pm to 5pm curfew was imposed, and you were confined to a 5km radius around your home.

Restrictions have since eased. The curfew is no more. Schools are reopening, as are hairdressers. My local barber sounds and looks like a sheep shearing station. The 5km radius has become 25km. And yet most businesses remain shut.

What was consistently ranked as the “world’s most liveable city”, is, economically at least, on life support

In contrast, the business of sport has continued. This weekend marks the finale of the two major winter sports - first, the AFL Grand Final and then on Sunday night, rugby league’s NRL showpiece.

The Gabba in Brisbane will host the AFL final on Saturday evening. It will be the first time the final has been hosted outside of Melbourne and the first time that an evening slot has been preferred. Both occurrences are symbolic of what the AFL has had to do to complete its season.

To avoid a Covid-shutdown, the 18-club AFL had to migrate en masse to Queensland. Teams were hosted in bio-secure quarantine hubs for months on end. The AFL’s dependency on TV money meant that commercially and contractually it had to have a season. It is likely that if the TV broadcasters had requested a midnight Grand Final played on ice, the AFL would have obliged.

As for the game itself, the defending champions, Richmond, appearing in their third final in four years, are favourites. They will face Geelong, featuring Zach Tuohy and Mark O’Connor. Both Irish players contributed enormously to Geelong’s victory over Brisbane in last week’s preliminary final - better known to the rest of the world as a semi-final.

Tuohy kicked the goal that sealed victory. In a sporting culture where praise for outsiders is as rare as rain at Uluru, Tuohy is acknowledged as one of the best technical kickers in AFL. He was equally adept off the field when a smirking interviewer later asked if “his family in Port-a-loose had watched the game in real time?”

“It’s Portlaoise, as is dog-leash, and yes we have the internet in Ireland”, came the edgily dismissive reply.

O’Connor has been one of the most impressive players for Geelong all year. It clearly takes more than a pandemic to distract a lad from West Kerry from his footy. Unflappable, he looks like someone who could immediately fly home and do a job for Peter Keane and Kerry in the championship.

If you get to see the final, watch out for Geelong’s Gary Ablett. It will be the last game in his illustrious 18-year career. Ablett (36) is like the Andrea Pirlo of the AFL: his movement may now be limited but his skills are still limitless.

Although Richmond are favourites, they have lost one slight advantage. Richmond is the suburb adjacent to the Melbourne Cricket Ground (MCG) where the final is traditionally held. This week the MCG and Melbourne’s CBD, normally the home to thousands of fans, will remain eerily silent.

The lockdown has hit the city hard.

Prior to the pandemic, it was projected that by 2025 Melbourne’s population would move beyond 5.5million and surpass Sydney as the Australia’s most populous and prosperous city. That will now occur. The economic, social and cultural vibrancy that immigration brings to Melbourne has shuddered to a halt as unexpectedly as the city’s famous trams.

For now, what was consistently ranked as the “world’s most liveable city”, is, economically at least, on life support. An aggravating factor for Melbournians is the fact that in June, Victoria, as with the rest of Australia, had largely suppressed the virus. An outbreak in a quarantine hotel involving international travellers and security guards saw Victoria alone return to lockdown.

Having tasted the freedom that is normality, the return was a huge psychological blow. The increase in mental health referrals by Victorian GPs has since increased by an egregious 30 per cent.

In July, Melbourne felt a bit like ancient Rome: you defeat the Visogoths; then along come the Vandals. As in Rome, at least in Melbourne we still had the “bread and circus” that is sport.

The lessons from lockdown in Australia for Irish sport are threefold. First, there will be grumblings from predictable sources about the public threats posed by continuing with elite sport. If, however sports are consistent in their strict adherence to Covid-19 protocols, then the games themselves will soon be seen by the majority as a necessary, welcome part of the public health response to Covid.

Second, most sports participants, used to a disciplined regime, will abide by the protocols. In Australia, the trouble came from players on the periphery of selection or teams in the immediate aftermath of a defeat.

Third, do not push it with the public. This weekend, one of Australia’s great races, the Cox Plate, takes place at Moonee Valley. Aidan O’Brien’s Armory has settled well in Melbourne and will run well. The Victorian government sought to allow 500 spectators at the meet. In a city where only 10 are allowed at a funeral and five at a wedding, the decision - probably made with the Melbourne Cup on November 3rd in mind - was quickly retracted.

Moreover, and even if Nphet does not mandate it, if trends indicate that continuing with a sport is posing a public health concern, just stop. The Olympics were postposed, so can a GAA championship,

Finally, on July 30th Victoria had a record 723 daily coronavirus cases. This week, the 14-day average is six. Friday in Victoria is a public holiday; usually AFL Grand Final Day, it has been renamed “Thank You Day” for 2020.

Sports mad Melbourne, on the way to defeating the virus on and off the field of play.

Jack Anderson, Professor of Law at the University of Melbourne.

3 Jackie Tyrrell: every corner-back is an island now