Heartbreak for Tuohy and O’Connor as Tigers down Cats

There were 30,000 people at the Gabba to see Richmond claim third title in four years 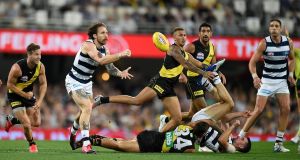 Zach Tuohy of the Geelong Cats in action during the 2020 AFL Grand Final match between the Richmond Tigers and the Geelong Cats at The Gabba in Brisbane, Australia. Photo: Matt Roberts/AFL Photos/via Getty Images

It was a grand final like no other to conclude a season like no other. So much was unrecognisable – the first decider played under lights, the first played outside Victoria – but there was something very familiar about the outcome as Richmond overwhelmed Geelong by 31 points at the Gabba.

The many changes wrought by Covid-19 were meant to attach a sardonic asterisk to the 2020 premiers, one that sought to cheapen the achievement. Many will still want it there, but this was business as usual for Richmond: a third flag in four years and a continuation of what now ranks as one of the great modern-day dynasties.

They were made to work for this one, unlike in 2017 against Adelaide and last year against Greater Western Sydney. Geelong, with Irish pair Zach Tuohy and Mark O’Connor in their ranks, were the better team in the first half but Richmond did as good teams do: fought their way back by sheer force of will and liberal doses of magic from Dustin Martin, who kicked four goals to continue his love affair with grand finals.

The Tigers turned around a 15-point half-time deficit with a dominant nine-goals-to-two second half. Martin was the spark for Richmond and he was a richly deserving winner of his third Norm Smith medal, the only player to have won the award for best afield that many times. Trent Cotchin is now crowned as Richmond’s first three-time premiership captain and his lifting of the trophy was galling for a gallant Geelong team that had so much to play for.

Gary Ablett’s celebrated 357-game career ends not with a third premiership but with defeat and a heavily strapped left shoulder. Joel Selwood’s 200th match as captain was in a losing grand final and his wait to become the club’s first four-time premiership player goes on. Patrick Dangerfield, after a 268-game wait to play in a grand final, loses at his first attempt.

All three were influential at times in Geelong’s first grand final since 2011, the season after Ablett departed for Gold Coast. But the holy trinity is no longer. Chris Scott’s coaching record since the flag year of 2011, which has included four losing preliminary finals, will continue to be brought into question.

Upwards of 40 millimetres of rain had lashed Brisbane in the preceding 24 hours, leading to puddles of water forming on the Gabba surface by mid-afternoon. By game time the rain, and thunderstorms, had abated. There would, thankfully, be no enacting of the AFL’s extreme weather policy that might have seen the match to be stopped for up to an hour, or postponed entirely, if lightning strikes are identified within 10km of the stadium.

If the dark skies hanging over the Gabba afforded the match a sense of foreboding, the portents were accurate. The game was barely minutes old when Nick Vlaustin was felled by an errant Dangerfield elbow to the head and Ablett went down in a tackle. Both men left the field but only Ablett would return, his dislocated shoulder popped back in.

The lengthy delay as Vlastuin was stretchered off looked to have a calming effect on those still standing. Tom Hawkins and Dangerfield both blew set shots they might normally convert but nerves soon settled and it was left to Dion Prestia to kick the first major of the game. Kamdyn McIntosh followed up moments later on the back of some trademark slick ball movement and the Tigers were up and away.

But the Cats soon asserted themselves with goals to Cam Guthrie and Mitch Duncan, the latter a pearler that countered range and angle. With three minutes of the first quarter remaining, play was again stopped – this time to deal with a pair of pitch invaders. Almost 35 minutes after the first siren – 10 minutes longer than standard in 2020 – the opening term was finally done. Geelong led by a point. Welcome to the AFL grand final, Gabba style.

Buoyed by their good finish to the first term, Geelong started the second with purpose. Dangerfield was becoming a menace up forward, converting one set shot, missing another and very nearly setting up Gryan Miers courtesy of a fantastic chase-down tackle. The Cats were beating Richmond at their own game, tackling maniacally in their forward 50 to such effect that the ball rarely made its way to the other end.

Inefficiency was threatening to be an issue for Geelong but Sam Menegola and Tom Hawkins converted set shots to halt a run of three straight behinds, the latter set up by a freakish handball from Ablett to release Selwood. Geelong’s stars were shining and it took an individual piece of brilliance from Martin to restrict the Tigers’ deficit to 15 points at the main break.

The margin might have been greater, however. The Cats were on top in virtually all key statistical areas, but most tellingly they restricted Richmond to just nine marks to half-time; the Tigers’ match average in 2020 is 70. The half was being played on Geelong’s terms. Richmond could not get their hands on it. But this would be a game of two halves.

The Tigers began the third quarter as they needed to: with an early goal. Daniel Rioli and Jack Riewoldt had done little in the first half but both were involved as the latter kicked truly from a standing start. Jason Castagna followed up soon after and all of sudden, Richmond were just three points down. Miers’ goal on the run ended a run of three straight for Richmond but goals to Kane Lambert and Martin midway through the quarter confirmed Richmond were not only back in the contest, but now in front on the scoreboard. Geelong could not capitalise on their good moments; Ablett loitered with intent as a deep forward but was grimacing with every touch. At the last change, Richmond were two points to the good on the back of a four-goals-to-one third term.

That lead quickly became eight points when Prestia ran one through from the pocket in the opening minute of the last quarter. Ablett was still off the ground receiving treatment; Dangerfield kept crashing packs, Selwood kept trying, but there was no mistaking the turning of the tide. Lynch’s first goal was the Tigers’ fourth in a row and there was a sense of celebration about Martin’s third major just moments later.

A sickening collision that saw Sam Simpson taken from the field embodied the brutality of this contest. It also caused a lengthy delay with seven minutes remaining, after which Menegola drilled a rousing goal that lifted Geelong hopes. But 16 points would be as close as Geelong got. It was all Richmond from there, Riewoldt adding insult to injury with an exquisite goal from a tight angle in the closing minutes.

But the best was saved for last as the best man on the ground, Martin, snapped a ludicrously brilliant goal from the pocket in the dying exchanges. It was a moment that confirmed his greatness and that of his team. – Guardian