Dan Martin creeps into Tour top-10 as the mountains approach 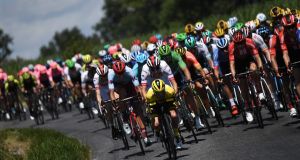 On a stage which looked relatively inconspicuous on paper, the biggest upending yet of the Tour de France general classification list put a serious dent in the challenge of several of the big contenders, while boosting that of defending champion Geraint Thomas and Ireland’s Dan Martin, amongst others.

The hammer went down on the road to Albi, with gusting winds and tactical racing splintering the peloton, and relentless pace-driving cementing the damage. Those left behind fought to limit their losses but with the clock ticking from the moment young Belgian Wout Van Aert (Team Jumbo-Visma) beat Elia Viviani (Deceuninck-QuickStep) in the final sprint, each second lost inflicted damage.

A full one minute and 40 seconds after Van Aert landed his first-ever Tour stage win, Thibaut Pinot (Groupama-FDJ), Rigoberto Uran (EF Education First), Richie Porte (Trek-Segafredo) and Jakob Fuglsang (Astana Pro Team) trailed in. Each are big names: Pinot is the big French hope of this year’s race and had started the stage third overall. Uran finished second overall in Paris two years ago, while Fuglsang has been one of the best riders this season, winning races such as Liége-Bastogne-Liège and the Tour warmup, the Critérium du Dauphiné. And Porte, a former teammate of Thomas at Team Sky, is one with the ability to excel in the mountains.

All were caught out when the hammer went down inside the final 30 kilometres. Mikel Landa (Movistar) initially made the split but was stranded when he crashed. He lost two minutes and nine seconds, as did Martin’s UAE Team Emirates teammate Fabio Aru.

“It’s a really good day for us,” said the 2018 Tour champion Thomas after the stage. “We were in the perfect position when it split - we all committed when we needed to.

“It’s a good gap now - and we’ve landed a good blow on a day when you wouldn’t really have expected it. To gain a minute and a half due to a positioning error on their part is great from our point of view.” Overnight leader Julian Alaphilippe (Deceuninck-QuickStep) continues to lead overall, with Thomas and teammate Egan Bernal jumping three places to second and third overall respectively.

Martin makes a bigger improvement: he improved seven places, rising to a fine ninth overall. He had said before the race that his big goal for the opening ten days was to stay healthy, stay upright and to limit any time losses: he had achieved all three targets, and was quietly satisfied with how things worked out.

“Today was a stage that we said we had to be focussed from the start,” he said, explaining that they had identified stage ten as a potential risk. “With the wind, there was just a constant fight for position. You just had to stay concentrated. I just kept that focus and stayed in the top 20 all the time. It is hard mentally, but obviously it paid off.”

Martin had been caught out in a split on Friday’s seventh stage, but his team helped him close the gap and he avoided a time loss. His gains on Monday saw him overtake all of the big names who were gapped, and he ends the day inside the top ten with the big mountains yet to come. Tuesday is the Tour’s first rest day, and then Martin will head towards his favoured terrain.

“We have got one more nervous day after the rest day,” he said. “We will just take it day by day, get through that stage and then the real race starts. Normally the Pyrenees is where I have done well before. We will hope to enjoy the race a bit more there, if enjoy is the right word.”

Martin is two minutes and nine seconds off the yellow jersey of Alaphilippe, although the Frenchman is an uncertain prospect for the high-altitude mountains later in the Tour. The Irishman is just 57 seconds behind Thomas, and will hope his continuously-upward trajectory holds as the race heads towards the big climbs.