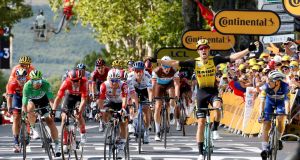 Geraint Thomas seized the initiative as the Tour de France peloton was blown apart in the gusting crosswinds of the Tarn, on the eve of the first rest day in Albi, with Thomas, his Ineos teammate Egan Bernal and the consistently surprising Julian Alaphilippe, distancing their rivals.

A sedate 10th stage exploded into life in the closing 30km with the key challengers for final victory hunting each other on the rural roads leading to the cathedral city, and precocious Belgian talent, Wout van Aert, riding his first Tour, taking the Jumbo-Visma team’s fourth stage win of the race.

What had looked likely to be a transitional stage tailored to an opportunistic breakaway move, morphed into a decisive one for Thomas’s hopes of claiming a second yellow jersey in Paris as he moved into a more dominant position before the climbs of the Pyrenees.

“I had a really good day in the end,” the defending champion said. “We had a little go a bit earlier but it wasn’t quite the right conditions, but we were always attentive and ready for anything.”

With the wind blowing across the route, Thomas, Bernal, Alaphilippe and Romain Bardet distanced Thibaut Pinot and others in a finale that was as cruel as any mountain stage. Isolated, Pinot failed to close the gap and dramatically slid down the overall standings, prior to the first mountain stages.

Mikel Landa meanwhile, lost over two minutes to Thomas after he appeared to be nudged onto the verge, before crashing into a group of roadside spectators.

“On a day like today you’d never expect it really,”the Welshman said of his time gains on Pinot, Rigoberto Urán and Jakob Fuglsang. “It’s just a positioning error from them and they’ve lost over a minute and a half. It’s great from our point of view.”

“We had everyone bar two guys there,” Thomas said of his team’s presence in the front group, “so we all committed. Behind they went full gas on the climbs and were trying to close it, but because they didn’t, then I think the elastic snapped and we got such a big gap.”

Of the contenders for final victory, Pinot was the biggest loser, fighting desperately to close an ever-growing gap, with only one teammate able to assist him. As he wheeled to a halt at the finish, his sullen reaction told the story. “Nothing to say, it was a shitty day,” he muttered to the waiting French media before riding back to his team bus.

Not for the first time, Pinot’s challenge is wilting in the heat of the south of France, as much due to tactical error and inattentiveness as due to the strength and opportunism of his rivals.

In contrast, the Ineos team of Thomas and Bernal seem to be growing in assurance, even in the absence of four time winner Chris Froome. “We’re where we wanted to be,” sports director Nicolas Portal said.

However Portal acknowledged that his team missed Froome’s leadership.. “I’m not saying the other two [Thomas and Bernal] don’t make up for it but everyone’s different – we miss him as a person, too. He was the central point for several years.

“Even in the peloton, not to have Tom Dumoulin [HERE]and especially Froome, it’s a change. Some teams have been taking initiatives and we’ve taken less, which is good for us. Now we’re going to see in the mountains– are teams going to be active, and trying things, or letting us take charge?”

But Froome’s absence has also had its upside, Portal said. “The fact is that we’re not being insulted. It’s the opposite from last year. It’s quiet and it almost seems weird.” - Guardian