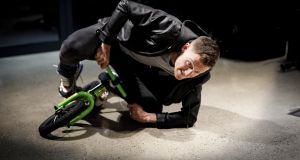 Sam Bennett joking around: ‘Other sports stars might have baulked at the idea of such a light-hearted picture.’ PhotographL Shane Stokes

It’s the Saturday before Christmas and Sam Bennett takes hold of a tiny child’s bike at the Specialized Ireland headquarters in Citywest. It’s not for a present, though – he and his new wife Tara aren’t parents – but rather he’s responding to a prompt from this writer for a quirky photograph.

Bennett sits low on to the tiny saddle, knees thrust outward in a squat, and moves his hands in close to hold the narrow bars. That photo done, he suggests a different shot, one where he looks as if he’s cornering like a MotoGP racer. He leans the bike sharply but because of the size of it, ends up almost lying on the floor. He pulls a serious face for the photo and then laughs, enjoying the craic.

In ways, the moment sums up an aspect of his personality; to use the obvious cliche, 29-year-old is so down to earth he’s practically horizontal. Other sports stars might have baulked at the idea of such a light-hearted picture, particularly after what ended up being several hours of photo and interview obligations for Inpho and The Irish Times. But not Bennett. It’s after 9pm, he hasn’t had dinner, he’s facing a long drive back to Carrick-on-Suir, but he’s happy to oblige.

Bennett might not carry himself with precious airs, but he is one of the best cyclists in the world. He clocked up a flurry of impressive results this season, including 13 pro victories. These included 11 at the top-ranked World Tour events, including two stage wins in the Vuelta a España, Spain’s equivalent to the Tour de France.

It’s his most impressive season yet but a lot more could be in store in 2020. He has signed a contract for the Deceuninck-QuickStep squad, the best team in sprinting and he should be their star rider in big bunch finishes.

“I had a poster of the team on my wall when I was young,” he states, finally able to discuss the move after months of complications. “It was always my dream team, and now I’m part of it all. It’s great.

“I recently was at a training camp with them. Straight away I can see that the character of the team is a lot different. It is so friendly. Everybody is so welcoming. It is just a really nice work environment. It is really motivating . . . I can’t believe how motivating it is to move team. It is like a fresh start.

“You want to prove yourself again. You are building new relationships, you want to start off with good morale. It is great place to be, I am really happy.”

Bennett is psyched about the move, but there was a time when it wasn’t certain it would happen. He turned professional six years ago and has spent the entire time riding for a German squad currently named Bora-hansgrohe. Both of those title sponsors are also German. Because of this, the younger (and less successful) German rider Pascal Ackermann was given precedence over Bennett when it came to selection for the 2019 Giro d’Italia.

Bennett felt frustrated by that, both because he had won three stages in the race one year previously and also because he was having a great season. He also missed the Tour de France as the team gave the nod to former world champion Peter Sagan.

Deceuninck-QuickStep recognised he is arguably the quickest sprinter in cycling and showed interest. However Bora-hansgrohe resisted. Although Bennett’s previous contract was at an end, it wouldn’t release him. There were rumours about a provisional agreement, although this was never confirmed. Cue lawyers, months of tension and a lot of difficult negotiations.

Bennett was tight-lipped about this on Saturday. He finally got the green light to leave the team in recent weeks, but is cautious about saying anything about those tough times. What is clear is that a once-successful relationship became strained. What’s also clear is that Bennett remained utterly focussed despite the turmoil; he went to the Vuelta under a lot of stress, yet still performed. Two wins and four second places on stages are testament to this.

“I think it was a very difficult contract year,” he says. “But I still had to focus on my race programme. I was very professional. I tried to win throughout the season and I finished with the team on a good note by still winning races.”

Next season should be very different. He is being signed as the number one sprinter on the team and will have the full backing of a squad generally regarded as the strongest stage-hunting team in cycling. It’s full of powerful Classics riders and experienced leadout men, and their assistance means Bennett should thrive. He’ll have the best help possible on the sprint stages in big races so it should be his most successful season to date.

“Riding for QuickStep was a dream of mine from an early age. I couldn’t let this opportunity go,” he says. “I am really excited because being with the team means I can get more opportunities to win races. I will be put in the right place more often and that consistency should mean I am going to win more. They are just showing such belief in me . . . I feel like they are really accepting me as a big rider.

“I know I am a good rider, but sometimes I don’t see myself as a big rider. But they really make me feel like I am. That’s very important for my confidence.”

All going to plan, Bennett’s programme will include the Tour de France, cycling’s biggest event. He rode it twice, but bad luck and illness meant his 2015 and 2016 participations didn’t go to plan. He told The Irish Times afterwards that he wanted to stay away from the Tour for a couple of seasons but now, older and stronger, things have changed.

“I am ready to go back,” he says, certainty evident in his voice. “I think I would have been ready this year, but I am definitely ready now.

“I do think a stage win is possible, but there are a limited amount of sprint stages. So you do need a bit of luck too. I would like to try to go for the green jersey as well.”

Former world number one Sean Kelly agrees a stage win is possible. He knows Bennett well; both come from Carrick-on-Suir, and the younger rider was also part of the An Post Sean Kelly team for several years. But Kelly recently told The Irish Times it is also possible that Bennett could don the race leader’s yellow jersey. Success on stages one or two should be enough to achieve this.

“It all depends on my build-up coming into it. I have to have race legs as well,” Bennett says in response. “And it is a very hilly first stage. Everybody is motivated on the first stage and it will be really hard. The sprinters are going to be on the limit. But it is something that is possible. I am just looking forward to giving it a go.”

He knows that a Tour stage win or stint in the yellow jersey would be huge for his career. It would also do wonders for his profile in Ireland.

“Sometimes it is very frustrating,” he says, believing he is a little forgotten about back home. Being left off RTÉ’s shortlist for Sportsperson of the Year backs this up. “In the cycling world I am . . . okay, it sounds arrogant, but I am pretty high up. And I am a good athlete. But it is not recognised in Ireland. It is funny, I have the ability to win a stage in the Tour de France and I do win races that are the same category, WorldTour. But I am almost not recognised [in Ireland] as a world-class athlete.

“I think if I win a stage there, people will give me the recognition and accept me as a top athlete in Ireland. I’ve probably more recognition in Belgium and Italy and France than I do here.”

If things go to plan, that could all change in 2020. But even so, he’s likely to stay the same. Down to earth, not taking himself too seriously. Obliging, even when it comes to peculiar photographic requests.