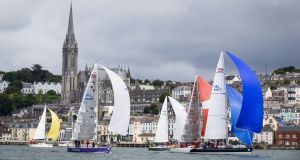 The Royal Cork Yacht Club will celebrate its tricentenary in 2020 as the oldest yacht club in the world and is expecting to welcome a bumper fleet of international visiting boats and crews in July. Photograph: David Branigan/Oceansport

Two stand-out events in the 2020 calendar are set to capture the interest of sailors nationwide with Royal Cork Yacht Club’s tricentenary celebrations in July likely to prove the peak of the season for many involved in the sport.

Even before the main event itself however, there is a crucial countdown to the Tokyo Olympics with some key battles to look forward to between now and July when the regatta begins at Enoshima.

As matters stand today, Ireland has qualified in one discipline for the Games with two more to be decided by April.

Although the major qualification opportunities have now passed, both at the 2018 Sailing World Championships in Aarhus and various 2019 worlds over the past six months, just a few places remain up for grabs in the Men’s Laser single-handed event and 49er skiff events.

But the next four months will feature a trials series to decide who will represent Ireland in the Women’s Laser event.

As if this series wasn’t tense enough with four candidates in the running for the sole berth at Tokyo, for added suspense add into the mix the return of Annalise Murphy to the Laser Radial class. She declared her intentions just a few months ago.

The Rio 2016 silver medallist had intended competing in the 49erFX event with Katie Tingle but the learning-curve proved too steep in the time available to make sufficient inroads into this highly-technical class.

So it’s back to the Radial for Murphy but after a gap of three years that also included racing around the world on Turn the Tide on Plastic.

While otherwise occupied, her prime rivals were busy. Nenagh’s Aisling Keller achieved the Olympic qualification standard in the Radial in Japan and was closely followed by Howth’s Aoife Hopkins last July. They must be considered strong contenders.

Also currently in the mix but possibly more with an eye to Paris 2024 is Howth’s Eve McMahon, last year’s Under 17 world champion and youth bronze medalist.

Murphy’s Olympic medal and almost ten years of full-time competition in the Laser Radial will undoubtedly give her an edge but, in terms of current class form, she has no major competition experience so the others have a head-start of sorts. Whatever way the trials works out, it will be a tantalising series to follow even before the Olympics get underway.

Meanwhile, at the opposite end of the sailing spectrum to the world of elite Olympic athletes, the Royal Cork Yacht Club is preparing to celebrate a unique occasion for any sporting club as it marks 300 years as the world’s oldest yacht club in 2020.

The Crosshaven club has opted not to have a drawn-out, 12-month schedule of events but rather will concentrate activities around the traditional dates of Cork Week in mid-July.

Volvo Cork Week itself continues in its traditional format but additional events such as the IRC European Championships and the Morgan Cup offshore race are expected to provide a boost in attendance with RCYC sources indicating a surge of interest including a major shipper planning to deliver boats en masse to Cork from abroad.

A classic yacht regatta, a restaging of the historic Kingstown/Queenstown feeder race from Dun Laoghaire to Cobh, an international Powerboat Championship Festival, a Wild Atlantic Way sailing ‘cruise in company’ for visiting yachts and the Royal Cork Fleet Review featuring a parade of sailing craft in Cobh plus a gathering of naval ships in Cork city are all part of the programme.

1 Waterford turn Kilkenny upside down and inside out
2 Jim McGuinness: There is a way to save championship and make it competitive
3 Waterford’s frenzied waves of attacks too much for Kilkenny
4 Once in a blue moon: Cavan’s overnight success 15 years in the making
5 Ireland’s work-ons: Four things Andy Farrell needs to address
Real news has value SUBSCRIBE