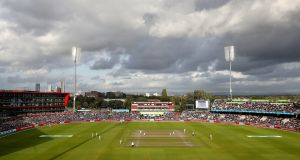 England will play the opening Test of their series against the West Indies at the Ageas Bowl in Southampton. Photograph: Martin Rickett/PA Wire

The International Cricket Council is discussing the possibility of introducing substitutes if a player tests positive for coronavirus during a test match, England and Wales Cricket Board director of special projects Steve Elworthy said.

Last year the ICC approved “like for like” substitutes across all formats of international cricket to replace concussed players during matches and Elworthy said the same rule would have to be applied for coronavirus substitutes.

“Covid replacements are certainly something that the ICC are discussing,” Elworthy told Sky Sports.

“I’ve seen communication about that and it’s certainly something we hope would be allowed – specifically for test matches, not necessarily ODIs (one-day internationals) or T20s (Twenty20).

“That replacement would have to be a ‘like-for-like’ player ... Our on-site Covid medical practitioner and Public Health England would be informed immediately and that player would then be put into isolation for a period of time.”

England are set to host the West Indies in a three-test series next month, with the visitors flying in a 14-man squad plus 11 reserves who will train and quarantine together before the first test scheduled for July 8th in Southampton.

“With the testing protocols of getting those players into that [bio-secure] bubble first, you would hope that wouldn’t be a scenario we’d have to deal with,” Elworthy added.

“But clearly it’s something we are planning for.”

Derby wins moves Atalanta to second in Serie A 08:53
Mikel Arteta warns Arsenal must invest significantly to compete 08:15
Frank Lampard: top four race will come down to ‘focus and attitude’ 08:04
Chelsea remain in third after Norwich win; GAA dressing rooms to remain closed 07:25
Jack Charlton era made GAA sit up and realise its greatest strength 07:00
Here is your handy guide to sport on television this week