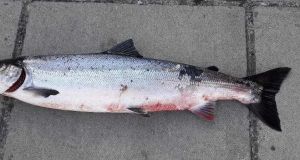 Salmon from the river Corrib showing signs of red skin disease in 2019: the disease has reportedly returned this year

The two rivers in question so far this year are the river Leannan, Co Donegal, and river Corrib, Co Galway.

Incidences of the disease were first documented last year in 56 salmon from 17 rivers throughout the country. The majority of the reports occurred in June and July with only one incidence reported prior to and after this time.

In the past few weeks, suspected cases have also been reported in Denmark, Norway and Scotland.

Salmon affected have a characteristic red-spotted rash on their underbelly and may appear lethargic or moribund. The rash can either be localised or extend along some or most of the fish.

As the disease progresses, skin lesions, signs of bleeding and skins ulcers can develop primarily along the belly area and extend to the head and tail. Secondary fungal infection can further develop, which may ultimately result in death of the salmon.

Fisheries staff are liaising with the Marine Institute Fish Health Unit and international colleagues to monitor and respond to the situation. As part of this, anglers and fishery owners are asked to report any incidences of RSD to help determine the occurrence of the disease.

Anglers who capture such salmon are advised to follow normal biosecurity procedures and disinfect tackle, waders and equipment. Until the cause of the disease has been determined and the risk of spreading the disease established, affected salmon should not be removed from the water.

Anglers are asked to forward any reports of salmon with signs of RSD, along with photographs and an estimate of fish weight, to salmonhealth@fisheriesireland.ie or IFI’s 24-hour confidential hotline number 1890 34 74 24 or 1890 FISH 24.

On Lough Sheelin, Brenda Montgomery reports that most of the 157 fish recorded succumbed to a wide variety of spent gnat patterns dressed to lie flat on the surface. The Wulffs were popular with the Grey and Royal landing some 5lb fish.

Spent gnat fishing kicked off after 5pm and ended as the light faded into darkness. During daylight hours mayfly nymphs and a selection of dry fly-mays did the business.

Although now is predominantly about the mayfly, there are plenty of other potential trout food out there – terrestrials, caenis, apple green midges, buzzers and, at the later end of the week, the appearance of the largest sedge – the Murrough.

The best areas for fishing was all down to wind direction and dips in temperature but the areas that fished best were along the western shore – Stony Island, back of Church Island, Merry Pt, Wilsons Pt, Inchacup, Chambers Bay and from Kilnahard down to Crover, Crane Island, Bog Bay, Sailors Garden and into Goreport, Lynch’s Pt, Derrysheridan and Derry Pt.

While most trout caught averaged 3lb with a scattering of 4-7lb in the mix, the heaviest trout topped the scales at slightly over 8lbs, on a Spent Gnat pattern.

The Bahamas government has recently announced the date for reopening the Bahamas to international visitors is July 1st. Given that the Delphi Club angling season at Abaco ends mid-July, it has been decided to close early for the summer.

The club is planning to reopen November 1st, 2020, and is temporarily suspending its normal reservations policy and will accept reservations with only a 25 per cent deposit. This deposit will be fully refundable in the event the pandemic prevents our guests from travelling to Abaco.