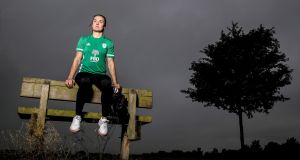 Kellie Harrington: “None of the other girls are fighting now either so we’re all in the same boat. I think I’ll be different [when I’m back]. I think I’ll be a little bit more aggressive.” Photograph: Dan Sheridan/Inpho

You might have seen her on social media. Kellie Harrington swatting imaginary opponents to the thumping sound of Freddie Mercury, the rest of the troops in St Vincent’s Psychiatric Hospital in Fairview banging the tables and We Will Rock You pumping out.

Body shots, upper cuts and combinations – the lightweight world champion has said in the past that her work is “nearly better than boxing”, For now the work is, at the very least, very real. Imaginary opponents are all she has to knock over as she swirls around in the bright conservatory.

“We’ve a lot of older patients in the hospital and you do worry about them. To me, they’re like family. The ward I work on, if anything happened to them I’d be absolutely devastated.”

It has been a longer wait for Harrington than most in lockdown. A hand injury last year took six months to heal before she arrived in January with a focus on the Olympic qualifying event for London in March.

While she was part of a 20-strong squad for a multi-nations event in Sofia, Bulgaria, the London trip turned into a dangerous mess. The event in the Copper Box in Olympic park in the east of the city ran for three days amid the pandemic before being abandoned as countries began to close their borders.

Harrington travelled but did not box. So her last competitive bout was five months ago. In the last 12 months she has had just four bouts.

“I’m really focusing on the fitness, my punching power and my technique,” says the FBD brand ambassador. “I feel like I have improved with that but I won’t really know until I get in and I’m able to spar and be able to tell. It’s kind of like a waiting game.

“You’re probably thinking I’ve been out of the ring a very long time and I’ve only had four fights. The way I’m looking at that is, yeah, I’ve had only four fights but none of the other girls are fighting now either so we’re all in the same boat. I think I’ll be different [when I’m back]. I think I’ll be a little bit more aggressive.”

A lot of what Harrington has been doing has been self-motivated. Working from home with her partner Mandy, who is a boxing coach, the days can run into each to each other and, with no definitive end in sight either for boxing to resume or the abandoned qualifiers to be rescheduled, different challenges can arise.

Harrington and others in the elite squads regularly work with sports psychologists, Dublin and St Judes Gaelic Footballer Kevin McManamon and Olivia Hurley. Both play a central role in the mental health side of training.

Speaking recently McManamon said the big thing he found was the lack of a goal or the sense of uncertainty about “when is the bell going to ring?” When are they going to get a chance to perform again.

The challenge has been to keep athletes ticking over.

“We’ve all been on this emotional rollercoaster since our routines and since the patterns of what’s been expected have been taken away from us,” added McManamon. “It’s fairly challenging.”

It’s an aspect that is not lost on the lightweight champion.

“People think as an athlete that you’re invincible sometimes and that you’re always positive,” says Harrington. “Like that’s the furthest thing from it. You’re not always positive. But sometimes for me to get out of a negative feeling, I have to act like I’m positive, if that makes sense.

“Some mornings I’ll wake up and I’ll be like, ‘I don’t wanna to go out for this run or I don’t wanna hit this bag this morning’. sometimes you’re head is struck and your brain is stuck in a negative situation, and it won’t move. Everyone feels like that sometimes.

Boxing has been good to Harrington. But as weeks, months and years pass it has become blindingly clear that she has been good to boxing. Her unfiltered Dublin inner city, Portland Row intelligence combines with an active sensitivity to others. Her tough upbringing could have seen her teeter and roll badly downhill. But thanks to boxing and her rewarding other life in the psychiatric hospital her days are full and varied and healthy.

Now her natural place is as a world championship silver- and gold medal-winning boxer, captain of the team and a role model status which she believes in and enjoys.

Heavens to Murgatroyd there is also a social media darling emerging and perish the thought that she evens knows or cares.

“I just say things as it is and that’s it really,” she says.

Then off she goes to rock some other room.