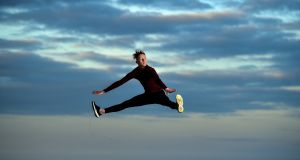 Irish figure skater Conor Stakelum has been training in his back garden after returning from his base in Dundee during the coronavirus outbreak. Photograph: Brendan Moran/Sportsfile

Of all the oddly curious sights of the elite athlete training during the lockdown – and there have been many – Conor Stakelum practising his triple axel moves in the spotlight of his own back garden must stand alone. Especially as he’s not wearing any skates and certainly nowhere near any ice.

“It might be worse if it was the front garden,” he teases, knowing full well there will always be something odd and curious about being Ireland’s top male figure skater – and perhaps more so with a family name like Stakelum, still revered among Tipperary hurling circles.

Since the figure skating season went into lockdown, like every other sport, he hasn’t just been training in the back garden of the family home in south Dublin: with a first-class microbiology degree from UCD, completed three years ago, he saw the opportunity to make a difference in the fight against Covid-19 and is now working five days a week as a laboratory assistant in a Dublin hospital. The training, including as much mimicking of his ice-skating moves as possible, takes up the rest of the day.

“Because I knew I was going to be home for quite a while, I decided to sign up for the HSE Be on Call for Ireland. It was actually my parents that first suggested it. Then I got the call, and it’s basically setting up the experiments around the testing, for the more advanced micro-biologists. I did have some lab experience, from my last year in college, but it’s definitely been a very different and interesting experience.

“It would have been awful to be sitting at home all the time. I’m so glad I did it. Because one of the hardest things for me is not having the same output of energy. I can’t sit still for very long anyway.”

Given the enduring lack of any permanent ice rink in Ireland, Stakelum has based himself in Dundee in Scotland since 2014, training under the British coaching duo of Simon and Debi Briggs, a move which slowly and then surely paid off. Now 26 and a five-time Irish singles champion, in 2018 he become the first Irish male figure skater to qualify for the European Championships, which have been running since 1981, qualifying again in 2019 and 2020, before the season came to a shuddering halt.

“Everything started to close up around March 20th, the UK almost a week behind, and I flew home after two days. There was no point in staying around Dundee when it was quite clear there would be nothing. There were only a couple more events anyway, most of them already cancelled.

“There are already some events at the start of next season that are cancelled too. So none of us are really sure at this stage what we’re training for, or how soon competitions will begin again, what the timescale is. It’s completely unprecedented, and everyone just has to adapt.

“My coaches are doing some Zoom classes, around the basic exercises, trying to mimic the jumps you do on the ice, while off the ice. You do quite a bit of that anyway, as part of your warm-up, off-ice training. Just a lot more of it now. Luckily I have a back garden for that. But really it’s just staying on top of my fitness, which I would do anyway.”

His father Richard won an All-Ireland with Tipperary a mere 31 years ago, his uncle Conor also winning one two years later, although Stakelum was first smitten by ice skating as a 12-year-old when taken to the temporary rink at Booterstown around Christmas, and has never looked back. The goal now is to become first Irish figure skater to represent Ireland at the Winter Olympics, set for Beijing in 2022.

“To be honest, last season was not as strong for me as the season before, so a break is not a bad thing. It’s good for me to maybe reset things, refocus on things. I can’t think too far ahead now, because you don’t know where that is, so I’m trying to use the time to improve on strength, flexibility, a bit more stamina. And hopefully that will stand to me next season.

“Qualification is around two events, the World Championships in 2021, and the Nebelhorn Trophy in Germany, in the autumn of 2021, but it is really quite difficult to qualify a spot, for the country. But I would say I am even more committed now, since the bit of the pause. I felt it would kind of convince me one way or the other, if I still wanted to keep going or stop, because all I can think of this whole time is I can’t wait to get back on the ice.”