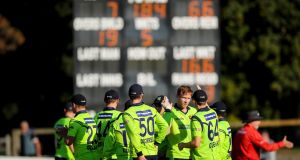 Ireland are due to take part on October’s T20 World Cup in Australia. Photograph: Oisin Keniry/Inpho

The Twenty20 World Cup may not go ahead as the leader of the game in host nation Australia revealed the schedule for October and November is under a “very high risk”.

Australia has announced its schedule for its international season, including a full tour from India and an inaugural Test against Afghanistan, though October’s Twenty20 World Cup appears likely to be postponed.

Cricket Australia (CA) boss Kevin Roberts indicated as much in a video call, saying “obviously, we’ve been hopeful all along that it could be staged in October-November but you would have to say there is a very high risk about the prospect of that happening”.

He added: “In the event that that doesn’t happen, there are potential windows in the February-March period, October-November the following year.

“And there’s implications here for the (International Cricket Council) over a number of years. So there’s a lot of complexity for the ICC to deal with.”

It comes less than a day after the ICC rejected claims the tournament will be postponed, insisting a number of contingency plans are being considered in light of the impact of Covid-19.

Ireland captain Andrew Balbirnie earlier this month cast doubt on it going ahead, believing the logistical hurdles would be too sizeable to overcome, but the ICC says it is investigating a number of possibilities.

A statement from the governing body said: “Reports of a postponement of the ICC T20 World Cup 2020 are inaccurate and planning for the event continues whilst a number of contingency plans are being explored in light of the rapidly changing public health situation caused by the Covid-19 virus.”