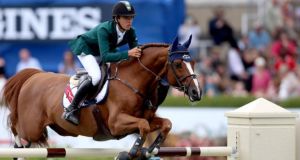 Wexford’s Harry Allen has followed in the footsteps of his brother Bertram by winning individual gold in the show jumping section of the FEI European pony championships in Kaposvár, Hungary.

In show jumping, Bertram Allen’s Valkenswaard team won the Berlin leg of the Global Champions League when he, on board Izzy By Picobello, and Italy’s Alberto Zorzi on Cornetto K, won Saturday’s second stage of the competition. With four rounds of the League remaining, Valkenswaard are in second place on 213 points behind Hamburg Diamonds (221) who were runners-up in Berlin.

British riders won four of the seven competitions at the weekend’s Camphire international horse trials in Co Waterford with Oxfordshire-based Izzy Taylor filling the top three places in the Gain Equine Nutrition & Alltech CIC3* class. She completed on her winning dressage score of 34 penalties with Trevidden and finished second with Be Touchable (37.5) and third on Perfect Stranger (41.9).

While most Irish event riders were competing at Camphire, Co Down Olympian Clare Abbott travelled to the Burgam horse trials in the north-east of England. There she warmed up for the four-star Burghley horse trials at the end of the month by finishing eighth (49.7) in the CIC3* class with the McKay family’s home-bred ISH gelding Euro Prince.

There will be international show jumping this week, from Tuesday through to Sunday, at the Green Glens Arena in Millstreet, Co Cork.