South African: ‘It really did upset me a bit. I’ve always shown him massive respect’ 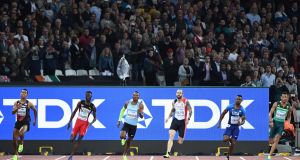 South Africa’s Wayde van Niekerk hit out at Isaac Makwala and accused him of a lack of respect after missing out on his dream double at the World Championships.

The 25-year-old claimed silver in the 200 metres in London on Thursday having already won the 400m, just failing to become the first male since Michael Johnson in 1995 to win both in the same championships.

He was beaten by Turkey’s Ramil Guliyev but was angered by Botswana’s Makwala, who claimed he was sabotaged following his controversial build-up to the race.

Makwala was denied entry to the stadium on Tuesday for the 400m final as the IAAF tried to contain an outbreak of the norovirus but returned on Wednesday to run a solo time trial and qualify for the semi-final before reaching the final – where he finished sixth.

And Van Niekerk, who broke down in tears during an interview with the BBC, claimed to be unhappy with Makwala’s assertion athletics’ world governing body the IAAF had unfairly quarantined him with a sickness bug to make it easier for Van Niekerk to take 400m gold.

Van Niekerk said: “It really did upset me a bit. I’ve always shown him massive respect and for him to come out and mention my name among something fishy with the IAAF and pointing me out as some kind of favourite, knowing how hard I’ve been working in the last few years.

“If I was an overnight success and it was my first gold medal I could accept a statement like that but I’ve been putting out great performances in the last two years now.

“I definitely deserve way more respect from my competitors. But this is a competition and an area where we want to be the best. We’re not here to make friends.

“I’ve learned a great lesson now so I’m definitely going to be taking the future by focusing on myself and not letting such negativity get to me.”

Makwala and Botswana had been critical of his treatment and the 30-year-old said he was still running heartbroken after not being allowed to race in the 400m.

He said: “It’s one of the craziest championships. I’ll always pray not to have another championships like this.

Guliyev, 27, had never won a world medal before but won in 20.09 seconds, with Jereem Richards third and Great Britain’s Nethaneel Mitchell-Blake fourth.

Guliyev said: “This is not a shock but this does not feel real. I am so proud. This title means a lot.

“I have shown my best throughout this competition. I delivered my best race at the right time. I’m so happy to be world champion. This is the best moment of my career.”