Must run 20.53 in a time trial to qualify for semi-finals later on Wednesday evening 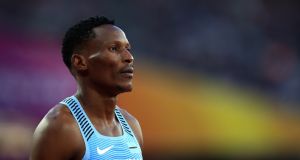 Isaac Makwala has the chance to compete in the 200m semi-finals after being excluded from the 400m on Tuesday. Photograph: John Walton/PA

Isaac Makwala has been handed some salvation from what he called his “sabotaged” 400m final here in London by being offered the chance to rerun his 200m inside the Olympic Stadium, alone, later on Wednesday evening.

The IAAF confirmed they received a written request from the Botswanan federation to allow Makwala to compete in the 200m, having originally withdrawn from his heat on Monday due the vomiting bug.

He was then forbidden to run the 400m final last night, despite being one of the medal favourites, after the IAAF insisted he remained in quarantine. That race was won by Olympic champion Wayde van Nierkerk in 43.98. Makwala has a best of 43.84.

Now however the IAAF have made special arrangements to allow him run: that will mean two races this evening, if he can run 20.53 or faster, which was the best of the fastest-loser qualifying times in Monday’s heats.

“Given his quarantine period expired at 14:00 hrs today (August 9th) and following a medical examination which has declared him fit to compete, we have agreed under our existing rules that assuming he makes the qualification time, he will run in the 200m semi-final round this evening.

“Makwala is required to run a time of 20.53 or faster to advance to the semi-finals. He will run at 18:40hrs this evening on his own in lane 7, which was his original lane draw in the opening round.

“No athletes already qualified for the semi-final will be adversely affected.”

The semi-finals take place at 8.55, and at least offers him some chance of making the final in what is his second favourite event.

After being forbidden to enter the stadium last night, Makwala told BBC Sport his “heart was breaking” and questioned how officials could know he was ill, without tests.

“How can they just look at you and see you are sick? If they had tested me I would not have that problem, but they just assumed. Usain Bolt is out now so the IAAF wants someone to be the face of athletics.”

However the IAAF replied: “There is nothing we want more than extraordinary competition in these championships. We freed up the competition schedule to allow this to happen, specifically between these two athletes by allowing the opportunity to double up at 200m and 400m.”