Don’t think twice it’s all right: David Gillick’s advice to his younger self 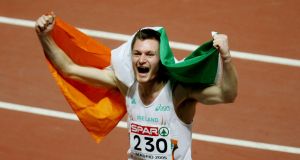 Twenty-one has turned 36, and in the impossibly swift 15 years since first interviewing David Gillick other things have changed too; his priorities and needs and the perception and perspective on just about everything, especially himself. A wife and two young children will help make sure of that.

Only with Gillick there’s more.

In February 2005, he won the British Indoor 400 metres title in 46.43 seconds: “Outstanding indoor talent out in the cold”, ran the headline, a reference to the fact the country still didn’t have a proper indoor track.

A month later Gillick won the European Indoor title in Madrid, defended it Birmingham in 2007, and two years after that ran 44.77 seconds, still the Irish 400m record and unquestionably one of our finest.

Not long after that things slowly then suddenly began to unravel, physically first, mentally later, and ahead of interviewing him again this Saturday afternoon as part of the First Fortnight festival of mental health awareness we both got to thinking again. As impossible as it is, if Gillick knew in 2005 what he does now what would the advice be?

“You’re going to have a career, be running into your mid- to late 20s, don’t sweat the small stuff,” he says straight up. “As a teenager, I didn’t think I had much talent, didn’t think I was good enough or would ever make it as a full-time athlete. So trust yourself, and try to realise you have the time to make it.

“Instead, I tried to be a perfectionist very early on, tried to do everything right, 110 per cent. Without realising that was having a negative impact. Unable just to switch off even, allow myself to be that young David Gillick, go out with my mates, have a laugh.

“Don’t try to be perfect in every shape or form. Don’t base everything you do around your athletics. Don’t always make the case for wanting more. And don’t be afraid to enjoy the good times, the bit of success, the few medals, along the way.”

Winning that European title at age 21 was never more than a blessing, but at the same time it raised expectations, especially his own: “I did enjoy it, but hadn’t really planned for it. So plan for success, plan to run well, plan to win.You’ll have to deal with other people’s opinion, but trust yourself, your instinct, and your own belief.

“It’s easy to get sidetracked, so don’t be so impressionable, and be more patient. You’re going to be running for the next 10 years, it doesn’t have to happen this year, or next year. Take on the journey, not just the destination.”

In 2006, after moving from Dublin to train with an elite group at Loughborough University, Gillick found himself more exposed to other things, including the topic of doping.

“Athletes will always wonder ‘what might so and so be on?’ and you have to accept that, in this sport, there will always be that cloud. But if you’re delving too much into what others are doing, you’re not focusing on yourself. When I came back in 2007 to Dublin, a guy at the bar was on to me wondering ‘what was I taking?’ That annoyed me, but also motivated me. ‘I’m doing this clean, and I’ll show them what I can do.’

“Don’t let that consume you. There is a time and a place to speak out, because athletes do have a voice, your opinion matters. But don’t let that tip over, turn into any frustration, or anger.”

Especially not on social media: in 2005, Bebo was all the harmless rage and baby compared to Twitter.

“Balance what you need with what you want. When you’re starting out, putting yourself in that shop window for sponsors, can be useful. The danger is when you start comparing yourself to others, which happens easily. You’re also putting yourself out there, so be prepared for people to have a shot at you.

“You have to ask the question, how does it impact you, how does it make you feel? If you feel positive, it puts a smile on your face, no harm. If you’re questioning yourself, then it’s not.”

“I remember thinking I’d compete in Beijing in 2008, London 2012, then Rio 2016. Instead Beijing was my first and only Olympics. And I didn’t even enjoy it, because again I thought it had to be perfect, you’ll be defined by the Olympics. I’d say now, go to the Olympics, try to see it as just another 400m race, don’t get bogged down by all the hype. Embrace it, enjoy it, and be proud of the fact you’re going to compete at the highest level.

“And definitely cultivate an outside interest, even if it’s just a hobby, a project, because it’s vital to have that outlet. When I got injured around 2012, that’s when I realised I didn’t have a whole lot outside my athletics, and to my absolute detriment, all my confidence and self-worth came from my athletics. Treat your mental health the same as a physical health. You have to work on it.”