Confirmed: Olympics and Paralympics postponed until 2021 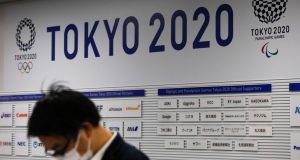 The Tokyo Olympics has been postponed for one year until 2021 because of the coronavirus outbreak. Photograph: AP

The Olympic Federation of Ireland has welcomed the decision to postpone the Summer Olympic Games to 2021, amid the current global coronavirus crisis.

They have explained the focus for Team Ireland now will be on protecting and safeguarding Irish athletes over the coming months, “and ensuring that they can bounce back to full training and be in peak condition for a successful Games in 2021.”

A joint statement from the International Olympic Committee and the Tokyo 2020 organising committee has confirmed the news, following a conference call on Tuesday, that the Olympic and Paralympic Games have been postponed until summer 2021.

“In the present circumstances and based on the information provided by the WHO (World health organisation) today, the IOC president and the prime minister of Japan have concluded that the Games must be rescheduled to a date beyond 2020 but not later than summer 2021, to safeguard the health of the athletes, everybody involved in the Olympic Games and the international community,” the statement read.

The Olympic Federation of Ireland’s acknowledged the difficulty of the decision Japan has made:

“Given the fast developments around the world with the Covid-19 pandemic makes this the correct decision under difficult circumstances.

“Nonetheless we recognise it was a difficult call for Japan to make, and we are looking forward to working with the IOC and countries all over the world to make Tokyo 2021 a poignant moment for the whole world once these difficult times are over.”