Coronavirus: Pressure continues to grow on IOC to postpone Olympics 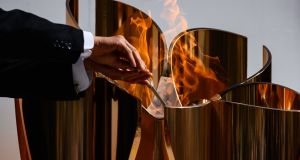 The Tokyo 2020 Olympic flame is transferred to the Olympic cauldron after it failed to light the first time as it goes on display at Ofunato, Iwate prefecture in Japan on Monday. Photograph: Philip Fong/AFP via Getty Images

Global pressure and demand is now mounting on the International Olympic Committee (IOC) to postpone the Tokyo Olympics into 2021, before they no longer have a summer Games this July to postpone.

Indeed, IOC member Dick Pound, admitted the decision has already been taken, telling USA Today that “on the basis of the information the IOC has, postponement has been decided”.

“The parameters going forward have not been determined, but the Games are not going to start on July 24, that much I know.”

Pound believes the IOC will announce its decision soon, adding: “It will come in stages. We will postpone this and begin to deal with all the ramifications of moving this, which are immense.”

Canada, Australia, the US, New Zealand, Britain, France and Brazil are among those countries where leading athletes and sporting federations have called on the IOC to postpone beyond the July 24th opening ceremony, preferably to 2021, or else they won’t be attending anyway.

Canada has effectively opted for a boycott of any Games that may take place, saying they won’t send its athletes to Tokyo unless they are postponed for a year due to the coronavirus pandemic. The Canadian Olympic Committee said holding the Games as planned would threaten the health of its athletes, “their families and the broader Canadian community for athletes to continue training for these Games”.

This came after the Japanese prime minister, Shinzo Abe, conceded for the first time on Monday that postponement was now a possibility if the Games could not be held in their “complete form”. The Australian Olympic Committee has also told its athletes to prepare to compete in the Olympics in the northern hemisphere summer of 2021, New Zealand also saying they would consider boycotting the Olympics if they open as scheduled.

After already mounting demand from athletes, the IOC on Sunday did concede there will be an immediate review of the “scenario-planning” around Tokyo, while also insisting “cancellation is not on the agenda”, but giving itself four weeks to make a decision, the Tokyo Games for now still scheduled to open on July 24th.

There has been some speculation that part of the issue behind the delay is because agreement has yet to be reached between the IOC and hosts Tokyo on the best way to proceed, without fear of litigation or breach on contracts, and are both awaiting the point of legal “frustration”, such as the withdrawal of countries, before making the decision.

In the meantime the Olympic Federation of Ireland (OFI) is now considering further steps of their own to ensure the safety of athletes still training towards Tokyo. “This does include considering if our potential Olympians can or should continue to engage in organised training for the foreseeable future,” said OFI president Sarah Keane, putting further pressure on the IOC.

“We have heard the latest update from the IOC regarding the Games, and we await in due course further information from them,” said Keane.

“However, we need to consider what’s right for our athletes, coaches, federations and all involved in supporting the system in Ireland at this time. This may go against the grain of what they are used to doing day-in day-out; however, at this time all options must be considered which we will do in conjunction with our member federations, athletes, Sport Ireland and other stakeholders.

“We can and are providing input into the IOC as the ultimate decision-making body for the 2020 Olympic Games. However, we can make decisions in Ireland for the best of Team Ireland and all involved.”

The intention now is to get an updated situation on where exactly athletes and teams find themselves in terms of 1) The current environment for their sport at elite level for those athletes tracking towards Tokyo; 2) Restrictions to the training environment for their elite athletes; 3) A general qualitative update on the current mood and any concerns that they have; 4) On the basis that the OFI feels that the Games are likely to be postponed, what is their current position on halting training sessions temporarily at this point?

French sports minister Roxana Maracineanu also said on Monday. “It is up to the Japanese government and the IOC to take the right decision . . . if the Games were to be delayed, the decision to delay should be announced as soon as possible as it would reassure all athletes and their coaches in all the countries.”

World Athletics president Sebastian Coe has already called on Tokyo to be postponed, sending a letter to the IOC saying that holding the Games in July 2020 was “neither feasible nor desirable” because of the global crisis.

It also comes against the backdrop of the latest advice from the World Health Organisation’s top emergency expert, Michael Ryan, who said a lockdown on societies across the world won’t be enough to stop coronavirus in its tracks, but that a set of strict public health measures will also be necessary in order to prevent a potential resurgence of the virus.

Aaron Hill’s brilliant run comes to an end against Chinese star Yan Bintao 21:43
Aaron Rai keeps the heat on as Irish big names frozen out at Galgorm Castle 20:49
Weekend Premier League team news, kick-off times and TV details 20:21
Mark Power finds his driving form in the nick of time to make the weekend 20:21
Ryan Mullen best of the Irish during World Championships time-trial at Imola 18:35
Here is your handy guide to sport on television this week