Coronavirus: Spanish death toll rises by 514 in past 24 hours 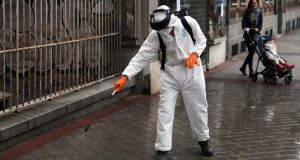 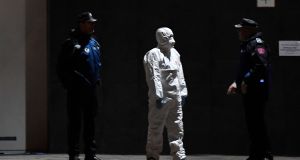 Policemen and a member of the Spanish Army’s Military Emergency Unit wearing a protective suit stand outside the Palacio de Hielo shopping mall where an ice rink was turned into a temporary morgu. Photograph: Pierre-Philippe Marcou/AFP via Getty Images

Spain recorded 514 deaths from the coronavirus on Tuesday, the highest daily increase so far, as the country struggles to contain the outbreak despite strict rules that are keeping people from leaving their homes.

Prime minister Pedro Sanchez had warned over the weekend that the worst was yet to come, and called on Spaniards “to be strong.”

The country is already in the second week of a lockdown set to continue until April 11th , with severe restrictions on mobility, police patrolling the streets and the army helping to move patients.

Soldiers drafted in to help disinfect and run residential homes have found a number of elderly people abandoned and dead in their beds, according to the country’s defence minister.

News of the grim discoveries came as Spain experienced a further rise in the number of coronavirus deaths and cases, and as health authorities set about distributing almost 650,000 rapid testing kits.

On Monday, the country’s defence minister, Margarita Robles, said that members of the specialist Military Emergencies Unit had found the corpses as they carried out their duties.

“During some of its visits, the army has seen some totally abandoned elderly people - even some who were dead in their beds,” Ms Robles told the Ana Rosa TV programme.

Ms Robles said such inhumane treatment would not be tolerated and that anyone ignoring their responsibilities would be prosecuted.

“We’re going to be very blunt and implacable over this and we have a very clear message: the full weight of the law will fall on those who don’t meet their obligations,” she added.

The rising death toll has placed a strain on hospitals and funeral homes around Madrid and led regional health authorities to set up a makeshift morgue at the Palacio de Hielo, a large ice rink in the north-east of the capital. “This is a temporary and extraordinary measure primarily intended to mitigate the pain of victims’ families and the situation in Madrid’s hospitals,” the regional government said on Monday.

In Spain, testing kits are being issued for frontline hospital staff, older people in care homes, and those in regions most affected by the virus. About 12 per cent of all those diagnosed with the coronavirus - some 3,910 people - are health workers, the government said on Monday morning.

The increase in cases in Spain came as the US scrambled to tackle the coronavirus pandemic amid blunt warnings that time and resources are running out, with the number of confirmed cases in the country rising above 35,000.

By Sunday night, the US had overtaken Spain to become the third most-affected country, behind China and Italy, with the US death toll standing at 417.

Authorities in Madrid, where almost a third of the country’s cases have been reported, have set up a huge field hospital inside the capital’s main conference centre. The facility at the Ifema centre, which took in its first patients over the weekend, could accommodate 5,500 people.

The country has been in lockdown since March 14th, with people allowed out only to buy food or medicine or to seek medical help or travel to and from work.

Fernando Simon, the head of Spain’s centre for health emergencies, said that talk of the contagion peaking this week could not allow people to become complacent.

“These are going to be crucial days because reaching a peak doesn’t mean things have been solved; it means we have to redouble our efforts to guarantee we don’t take a step backwards,” he said.

The mayor of Madrid, Jose Luis Martinez-Almeida, has said that municipal undertakers will cease collecting the bodies of coronavirus victims from Tuesday as they do not have the protective material needed to ensure their own safety.

In a letter to Spain’s health minister, seen by El Mundo, the mayor called for more resources, adding: “I hope you are aware of the gravity of the situation if this week we find ourselves unable to bury and cremate people who fell victim to Covid.” – Reuters/Guardian News and Media