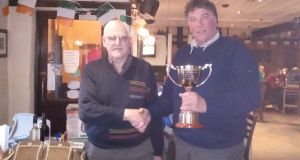 Waterford Trout Anglers’ Association treasurer Pat Smith presents Basil Shields (right) with the Carrigavantry Cup for his win in the charity competition in aid of Down Syndrome.

FROM my perspective angling continues to remain in the doldrums. Reports from around the country are scarce, almost negligible as club and open competitions are postponed or cancelled left, right and centre.

Of course these decisions are absolutely correct as Covid-19 continues to take hold and it is vital to rigidly adhere to the expert medical advice available.

My disappointment is palpable this week with the postponement of the two-day annual fly-fishing Burke Open competition, held out from Clonbur, Co Galway with fishing on Lough Mask.

Over 110 anglers were due to converge on this picturesque village to enjoy the camaraderie, the pig-on-the-spit, music and, of course, the wonderful fishing experience. Every bed in the village and surrounding area was booked months ago.

It is ironic that after almost a decade of the competition, the last two have now been cancelled or postponed for very valid and different reasons. Last year, our dear friend, Seán Maloney, tragically lost his life on the lake and, as a mark of respect, the event was cancelled.

However, having said all that, angling is after all, a one-person sport. What better way to spend a few hours in self-isolation than on a riverbank or beach or even two people boat fishing on a lake with at least five meters social distance between them!

Such was the case recently as nine boats (18 anglers) took to the water on Garrigavantry Lake in Kilmeaden, Co Waterford for a charity competition in aid of the Down Syndrome Association.

Hosted by Waterford Trout Anglers’ Association, the event raised €3,000 for a worthy cause. Continuing where he left off last year with a bumper haul of wins, Ireland’s No. 1 fly fisher (in my book, anyway) Basil Shields stormed home with nine fish to win the prestigious Carrigavantry Cup.

Hubbert lands massive specimen salmon on River Laune
Reports to hand from the Kerry region show a further three salmon for Lough Currane – one to fly and two trolling. The world famous Butler’s Pool produced a second fish, on this occasion the lucky angler was Waterville’s pro-golfer Liam Higgins with a salmon of 7lb on the fly.

(Butler’s Pool is a small stream and a gateway for all salmon and sea trout returning from sea to Lough Currane and the upper lakes and rivers.)

Congratulations are extended to Paudie Hubbert from Tralee for his outstanding specimen salmon of 22lb from the River Laune. Not only is this bar of silver a fish-of-a-lifetime for Paudie, it is also the heaviest salmon recorded in Irish waters since 2009

Kristers Lazdinsh caught the largest fish of the week, a seven pounder on a Green Snake while the total number of trout caught, amount to 45. Please note that a catch and release policy is actively encouraged on Sheelin at all times.