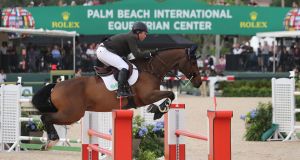 The first of 12 weeks’ competition at the Winter Equestrian Festival in Wellington, Florida concluded with a win for Ireland’s Cian O’Connor in Sunday’s $75,000 Rosenbaum Grand Prix.

The USA’s Molly Ashe Cawley finished second on Balous Day Date (36.455) with her compatriot, Brianne Goutal-Marteau, placing third on Zernike K (37.708). Co Offaly’s Darragh Kenny had a fence down in the jump-off to finish eighth with Scarlett du Sart Z (36.123).

“We went early and I knew there were some fast ones and good ones behind me, so I took out a few strides, particularly to the last, and really used my horse’s strength there,” said O’Connor, who has settled in Wellington for the duration of the season with his three top horses. “The course was fast and a nice test for the rest of the circuit.

“This is a big year for me and for team Ireland, so, I wanted to come here to try and be in shape physically and also on the horses during three months of intense riding and working. I came out here today to try and win this class, and it’s great that it happened.

“The main goal is to try and be up and running coming out of here and take what we can on the way, but not to overdo any of the horses. It’s only the build-up of the season toward the rest of the year, and obviously the goal all year in the back of my mind is Tokyo.”

Earlier in the day, Denis Lynch was crowned leading rider at the five-star show in Basel, Switzerland.

Riding Onyx Consulting’s GC Chopin’s Bushi (33.27), Lynch could only finish fifth in Sunday’s Longines FEI World Cup class but his performances throughout the four-day show saw him take the title. Nine riders recorded double clears in the concluding 1.60m competition with the win being secured in 31.44 by the host nation’s Steve Guerdat riding Victoria des Frotards.