Ciara Mageean out to double her indoor record distance in Athlone 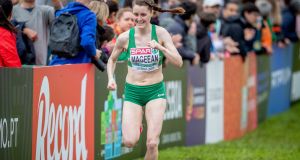 Olympic year and, after enjoying a record start in Boston last month, Ciara Mageean will look to continue that form in Athlone at the AIT International indoor meeting, this time when doubling her usual distance.

That Irish indoor record has stood to Mary Cullen since 2009, the 8:43.74 she ran in Boston, although Mageean certainly believes she is in the form to test it. Her indoor best at the distance is 8:55.09, set in New York five years ago now, and it would appear to be within her range.

“I haven’t raced a 3k indoors in a while, so I’m looking forward to seeing what I can do, and always love running in Athlone,” says Mageean, who also holds the Irish indoor mile record of 4:28.31 and is looking to complete a sort of hat-trick.

Mageean won’t have it all her own way, the organisers of the Athlone meeting – now in its seventh year and with a properly international feel – inviting Ethiopian 3,000m champion Kasanesh Buze, who has an outdoor best of 8:39.65, plus Camille Buscomb from New Zealand and Kriistina Maki from the Czech Republic, both sub 8:55 runners.

Next month’s World Indoor Championships, originally set for Nanjing, in China next month, have been postponed until 2021 due to the outbreak of the coronavirus, although Mageean had never intended on making that trip anyway.

Mageean is also not long back from an altitude training camp at Albuquerque, in New Mexico, and after Athlone will only have two more indoor races in Madrid (Feb 21st), and then the Irish Indoors (March 1st): “Yep, a short and sweet indoor season for me. I’m still getting used to the altitude camp training as well, and everything this year is about working towards Tokyo.”

The organisers are also lining up Ethiopia’s Samuel Tefera for an attempt on the world indoor mile record, the 20-year-old already the reigning world indoor champion over 1,500m, breaking the indoor world record over that distance last year, clocking 3:31.04 in Birmingham. The current indoor mile world record is held by his fellow countryman, Yomif Kejelcha, at 3:47.01.

Thomas Barr will also use Athlone to break up his winter training, this being his only indoor run over the 400m flat, before concentrating on the hurdles again for Tokyo; he will have three-time World and European Indoor Champion Pavel Maslak from the Czech Republic for company.

Phil Healy, still eyeing Tokyo qualification, will race over 200m in the company of Jessica Bianca-Wessoly (Germany), Estela Garcia (Spain) and Nicky Van Leuveren (Netherlands), and Mark English will also be looking for a better return over the shorter 600m after New York last Saturday, where he finished off the pace in the 800m in 1:52.94.

1 Avoid the treadmill at all costs – marathon training in the 2km radius
2 Sonia O’Sullivan: Taming The Tan gave us one last roll of the dice before shutdown
3 ‘NRL Island’ being considered in Australia to continue season
4 Final record attempts before lockdown; underage rugby feeling the effects
5 Rich Premier League clubs way off the mark in cutting staff pay
Real news has value SUBSCRIBE