Quarterback sensed the game, and Kansas City’s quest, was again on his shoulders 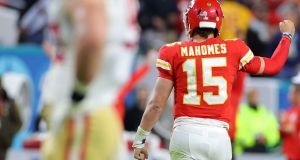 It was midway through the third quarter of Sunday’s Super Bowl when Patrick Mahomes seemed to realise he needed to take over the game if his flagging Kansas City Chiefs were going to rally to defeat the San Francisco 49ers, whose confidence had noticeably swelled after taking a three point lead.

But the immediate result was jarring: Mahomes threw two interceptions as San Francisco’s lead grew 10 points and the Chiefs stumbled into the fourth quarter.

More than ever, Mahomes sensed that the game, and Kansas City’s quest to win its first Super Bowl in 50 years, was again on his shoulders.

Just as he did in two previous games during this postseason, Mahomes, only 24, found the pluck and poise to lead the Chiefs to three touchdowns in roughly five minutes of the final quarter for a 31-20 Kansas City victory. In the closing, tense moments of his first appearance on football’s biggest stage, Mahomes threw two touchdown passes, scores that sealed the Chiefs’ first Super Bowl victory since the 1969 season and resurrected a franchise that is quietly known as Middle America’s team.

“It means so much to me to do something like this for Kansas City and all its fans in all the states around Kansas City,” said Mahomes, who came to the Chiefs in 2017 after a daring trade put Kansas City in a position to select him in the college draft. “The Chiefs brought me here and believed in me from the beginning. And all I’ve wanted to do since then is to reward their faith in me by winning a Super Bowl.”

Deep into the second half, it looked as if Mahomes would have to wait another season to reach that goal.

With five minutes remaining in the third quarter, he tried to force a pass that had to travel nearly 30 yards across the middle of the field and past a handful of 49ers defenders on its way to the intended receiver, Tyreek Hill. San Francisco linebacker Fred Warner cut a few yards in front of Hill and easily intercepted the pass. The 49ers soon led, 20-10.

It got worse for Mahomes. Early in the fourth quarter, another pass deflected off Hill and was intercepted by San Francisco’s Tarvarius Moore. The Chiefs fans, who outnumbered 49ers fans at Hard Rock Stadium, slumped in their seats.

“I really wasn’t playing too well there in the third quarter and a little bit beyond that,” said Mahomes, who was named the game’s most valuable player. “But the guys stuck with me. We don’t really back down there. We just kept firing away.

“I think we all believed we could come back again like we’ve done before.”

In their first playoff game this season, the Chiefs trailed by 21 points in the first quarter. Early in the AFC championship game they trailed the Tennessee Titans by 10 points.

“No one doubted what Patrick would do next,” Kansas City fullback Anthony Sherman said. “On the sideline it was like: ‘He threw a couple picks? So what?’ We knew he wouldn’t be put off by that. He never flinches; that’s who he is.”

A 44-yard pass to Hill seemed to shock the vaunted 49ers’ defense, which did not recover. Mahomes flung the ball sidearm on the play with a defender draped on his left side.

Later, Mahomes, who had 29 yards rushing and completed 26 of 42 passes for 286 yards, said it was a play that the Chiefs had been waiting to call against the 49ers’ secondary, which had been creeping forward to stop short crossing routes to tight end Travis Kelce.

“We need the right look and good protection, but I knew it was there,” Mahomes said.

Hill’s reception led to a scramble by Mahomes and a one yard touchdown pass to Kelce. The Kansas City fans got back on their feet in the grandstand.

After the 49ers ran just three plays and punted, Mahomes needed just six plays to advance the Chiefs to the San Francisco five yard line. A perfectly placed 38-yard pass to Sammy Watkins along the right sideline was the drive’s pivotal play. A five yard reception by running back Damien Williams gave Kansas City a 24-20 lead.

The reeling 49ers never mounted another serious threat, and the Chiefs tacked on a final score when Williams dashed 38 yards around the left end for the game’s final score.

“You know, Pat gets this look on his face when we’re down late in games,” Kansas City coach Andy Reid said afterward. “It’s like he’s thinking, ‘Hurry up, I need to get back out there and do something about this.’ And I love that part of him.