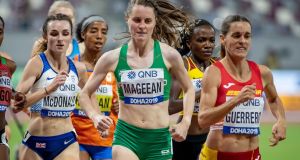 Ireland’s Ciara Mageean on her way to finishing fifth to qualify for the semi-final in the 1,500M at Doha. Photograph: Morgan Treacy/inpho

It’s only been 22 years since an Irish woman last made the final of the 1,500 metres at the World Championships, some measure of both the task and opportunity now open for Ciara Mageean after another hot night of athletics in Doha.

Mageean is used to such comparisons, given that it was Sonia O’Sullivan who made the final in Athens back in 1997, finishing eighth, four years after winning silver in the event behind China’s Liu Dong in Stuttgart.

It’s shaping up to a proper blue riband event in Doha too and to make that final Mageean may need to improve her lifetime best of 4:01.21 (clocked in Monaco back in July) on Thursday evening (9.0pm Irish time) as only the top five in the two races, plus the two fastest non-qualifiers, go through to Saturday’s 12-woman final.

Still the 27-year-old from Portaferry has given herself every chance, coming safely through her opening heat after some gentle pushing and shoving, yet running with the sort of control and confidence to suggest there is more to come.

Mageean needed to finish in the top six to be sure of progressing: she sat close to the front at the bell, sitting in third, and despite things getting a little bumpy around the final bend, held her form to finish fifth in the lead group of six that sprinted over the line in succession.

“A good, tough race, you never know in the major championships how these races will go, fast, slow or in between,” said Mageean, who endured a very different experience in London two years ago when she was trailed off at this same stage.

Mageean goes in the first semi-final, again with Hassan and Kipyegon for company, her best of 4:01.21 the sixth fastest in the field, which includes four sub-four women.

“I got myself in a good competitive position, said ‘I’ll hold on here’, and finished strong. Training at altitude in St Moritz went very well, working on a few strategies, and I feel like I’m in PB shape, and really excited now, just get myself in a good position again, but yeah, the plan is to make that final.”

After becoming the first British woman to make the 100m final at the weekend, winning silver, Dina Asher-Smith went one place better to deliver their first gold medal at these World Championships, her sublime performance over the 200m leaving that result in little doubt.

The 23-year-old from southeast London clocked 21.88 seconds, a new British record, also becoming only the seventh British woman in World Championship history to win a gold medal. Silver went to the American Brittany Brown in a best of 22.28, with Swiss woman Mujinga Kambundji visibly delighted to win bronze in 22.51.

It also came after six days of some crossfire commentary in and out of Doha, and at a press conference earlier in the morning, to mark the halfway point in the championships, IAAF president Sebastian Coe made some heated comments of his own, taking aim at both the BBC commentary box and also athletes who were complaining about the desert heat and lack of decent crowds in Doha impacting on their performance.

“Can I just be a bit blunt about this,” said Coe, “the athletes talking about externalities are probably not the ones who are going to be walking home with medals from here. Go figure.”

Coe also defended the IAAF decision to give these championships to Doha, back in 2014, despite the strong allegations of bribery in the years since.

“I have much, much bigger commitments and visions for our sport than to turn and head for home because we take an event into an area that poses problems.

“If we’re a global sport, we have to be seen as global. It can’t keep going back to the same eight or nine places that we’ve always sort of focused on in the past. But you won’t get there in one jump. We’re on a journey now.”

Coe also hit out at the BBC for highlighting the desperately poor turn out inside the stadium.

“It’s very easy to sit there and make all sorts of Gabby Logan-type judgments over three or four days and clear off back to Match of the Day. But it’s really important that we see the long-term development of our sport.

“That’s not going to be done because we have challenges over ticketing in a stadium for three days. The problem I’ve got with that is it’s the way our sport is being portrayed by some of the people in that [BBC] studio.”

Paul Kerrigan calls it a day after 13 years with the Cork footballers 14:32
Diego Maradona buried as world mourns flawed soccer great 09:17
Neil Lennon insists he is the man to turn it around for Celtic 08:58
Billy Burns named at 10 to face Georgia; Errors cost Dundalk against Rapid Vienna 08:00
Andy Farrell looking forward to some selection headaches come the Six Nations 06:00