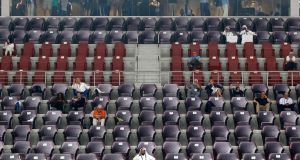 Rows of empty seats and sparse attendances have become a familiar sight at the World Athletics Championships in Doha, Qatar. Photograph: Diego Azlubel/EPA

Thomas Bach, the president of the International Olympics Committee, has been on a bizarre tour.

You know, the kind where you visit countries with question marks raised over their humanitarian standards, places where the UN have raised eyebrows when looking at the political and social landscape.

But Bach believes in the power of sport. He has been on a tour of the Saudi Arabian and Qatari sports facilities, fencing, playing ping pong, and hanging out with the future athletes.

In Saudi Arabia the Olympic officials were all looking ahead to 2030 and the vision of the president of the Saudi NOC, Prince Abdulaziz bin Turki al Saud. He wants to build new sports facilities for future athletes, while also asking for more women to participate in sports by 2030. Saudi Arabia, you know, the country that only started allowing women to drive recently. It’s a natural transition, driving to the Olympics.

But Saudi Arabia is serious about this. Just last month, documents were published which showed just how Saudi Arabia is planning to become a significant player in the sporting world.

First up, they needed a prince that actually knew a bit about how sports work. Step up crown prince Mohammed bin Salman.

The crown prince looked at the kingdom’s General Sports Authority, the Saudi equivalent of Sport Ireland, and asked it to start a sports development fund that supported and boosted sports activity in the country.

The objectives of the fund were to privatise football clubs to boost participation, promote new sports events and create 40,000 jobs as part of Vision 2030, a radical plan that would see Saudi Arabia embrace a modern, technological future where it would be no longer dependent on oil as a primary source of income.

If you ignore the crippling heat and general lack of interest from Qataris, this championship has definitely been a success

The crown prince knew they needed major ballplayers from the West involved to get the ball rolling. Meetings and business calls were set up with officials from Major League Soccer and Major League Baseball as well as those from the National Basketball Association, WWE and the Los Angeles Olympic Committee. So far, they are pretty successful.

Saudi Arabia, historically known for turning its back on western ideas and people, has now opened the doors to anyone who has cash to burn, dresses appropriately and is a pioneer. That seven per cent increase in tourism won’t happen by itself.

Saudi Arabia has a blueprint to follow and build upon. Neighbouring Qatar has been enjoying a boom thanks to sports. A future Fifa World Cup host, the staging of the current IAAF World Championships has seen Qatar and Doha splashed across front pages. Sure, if you ignore the crippling heat and general lack of interest from Qataris, this championship has definitely been a success in really showcasing the best of Qatar.

The marathon and 50km walk ended in world-class athletes being stretchered off and a hospital being set up to cope with the number of athletes needing medical attention. The track finals took place in front of a largely empty stadium and athletes who are on the watch list for WADA cleaned up in the medals.

So, sportswashing, or the politicisation of sports, has now turned its attention to the Middle East. As governing body officials are having their heads turned by the new strategies and, more importantly, the lovely briefcases, athletes and fans are being put on the back burner. As long as those in charge can make a quick buck then sport will continue to be used as a pawn in whatever deals are being agreed.

They tell us that sport and politics do not mix, but to the athletes in Doha celebrating in half-empty stadiums, the pinnacles of their career will now be etched on fans' brains. Sports and politics do mix, and it is a deadly cocktail that can only lead to more corruption and more human rights atrocities.