Mageean bumps and runs her way through World Championships heat 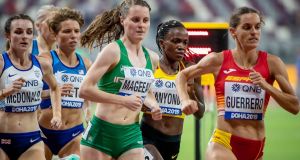 Ireland’s Ciara Mageean on her way to finishing fifth to qualify for the semi-final. Photograph: Morgan Treacy/Inpho

After some gentle pushing and then a little shoving Ciara Mageean came safely through her 1,500 metres heat at the World Championships, running with the sort of control and confidence to suggest there is also more to come.

Lining up in the first of three qualifying heats, Mageean needed to finish in the top six to be sure of progressing, and in truth that was never in doubt: she put her close to front at the bell, sitting in third, and despite things getting a little bumpy around the final bend, held her form to finish fifth in the lead group of six that sprinted over the line in quick succession.

Easing her way over the line first was Sifan Hassan, the Dutch woman looking to secure a first ever 1,500m-10,000m double, clocking 4:03.88; then came defending champion Faith Kipyegon from Kenya in 4:03.93, with Mageean just a stride behind in fifth, clocking 4:04.18. Britain’s Sarah McDonald was the sixth automatic qualifier in 4:04.42.

Things will get a lot more challenging and bumpy too in the semi-finals, set for Thursday evening (9.0pm Irish time), with only the top five in the two races, plus the two fastest non-qualifiers, going through to the 12-woman final. Still Mageean is right there in the mix and that’s good enough for now.

“That was the aim, get safely through and now get home and get recovered and get ready for tomorrow,” said Mageean, who endured a very different experience in London two years ago when she was trailed off at this same stage.

“There’s nothing to be left to chance in a championship, so I got myself in a good competitive position, held my ground and finished strong, and just make sure I’m in that top six.

“It was a tough enough race. Hassan sat and the back and then blows away, we expected that, but I ran the race to be the best of my ability, so yeah feeling good, feeling happy to have got through the round,”

Mageean did have to squeeze her way through Lemlem Hailu from Ethiopia and Georgia Griffith from Australia with 200m remaining, but running with the confidence that saw her win European Indoor bronze over the distance in Glasgow back in March, it was controlled running nonetheless.

Britain’s European champion at the distance Laura Muir, who missed the last month of racing with a calf injury, came safely through the third heat, won in the slower time of 4:07.28 by the American Jenny Simpson, with the second heat won by the Moroccan Rababe Arafi in 4:08.32