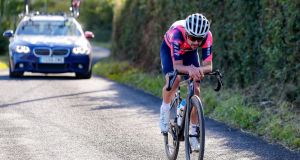 Ben Healy will wear one of the most prized jerseys in Irish sport for the next year after a spectacular ride at the National Road Race Championships in Limerick, the 20-year-old finishing the 155km course as if it were an individual time trial.

By far one of the youngest and most impressive winners of recent years, Healy – who only turned 20 last month – takes over the Irish elite senior road champion jersey from Sam Bennett, who wore it with such considerable distinction over the last 14 months, not least when winning the final stage of the Tour de France on the Champs-Élysées two weeks ago.

With Bennett unable to travel home to defend his title, the race appeared wide open, two-time former champion Nicolas Roche certainly among the most experienced. Instead, Healy, who rides with the Trinity Racing team in the UK, began pushing the pace on the second of nine 17.1km laps around Knockaderry, just outside Newcastle West, along with Darnell Moore, the duo soon opening a gap on a chasing group of seven and the main peloton behind.

Making the most of the dry and bright conditions, that gap was gradually increased and held to around a minute, until just over two laps to go, when Healy dropped Moore on the short climb, then rode pure solo and highly impressively until the finish, leaving the likes of Roche and company to chase in vain – and still looking remarkably fresh after his effort.

Roche did break off that chasing group and looked to close on Healy but couldn’t get within a minute, and finished second, the 36-year-old Team Sunweb rider having won this title first in 2009 and again in 2016, with Darragh O’Mahony from Rockchapel in north Cork continuing his recent improvement to take the bronze medal.

For Healy, who was born and raised in Kingswinford in the West Midlands in the UK and first declared for Ireland as a junior two years ago (his grandparents are from Cork and Waterford), it also marks another swift rise in status. On Thursday, he was also the outright fastest in the individual time trial, riding that as an under-23, having first won that title as a junior in Sligo in June 2018.

By coincidence it was Martin O’Loughlin of Cycling Ireland, who helped nurture and develop Bennett in his early years with Carrick Wheelers, who also helped encourage Healy to declare for Ireland, and who – again like Bennett – had first shown promise on a mountain bike.

Healy was also much in form, recently winning a stage of the Ronde de l’Isard, and last year also declaring his potential by winning Stage 5 at Tour de l’Avenir – one of the top under-23 races in Europe.

Earlier in the day, Ronan O’Connor from Orwell Wheelers was similarly impressive when winning the junior men’s road title, in only his first season as junior, attacking from the front of the final climb nearing the finish, with Eoghan Cooke (Ounavarra Cycling Club) in second, and Rowan Montgomery (Ballymoney CC) in third.