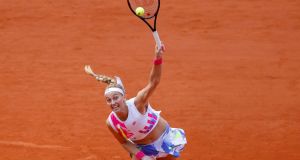 Petra Kvitova is closing in on an emotional maiden French Open triumph after reaching her first semi-final in eight years.

The two-time Wimbledon champion swept aside unseeded Laura Siegemund 6-3 6-3 in an hour and 20 minutes.

Kvitova, 30, is keeping her head while all around are losing theirs in a tournament which has seen seed after seed fall by the wayside.

Back at the scene of her comeback, three years ago, from the horrific knife attack which left her fighting for her career, Kvitova is now two wins from a first grand slam title since 2014.

Kvitova was almost in complete control against the world number 66, who did not help herself by questioning a time violation – a decision she branded ‘bullshit’ – on her way to dropping serve in the second set.

Siegemund hauled herself level but Kvitova, seeded seven, broke again and victory was sealed with a double fault from the German.

Kvitova said: “It means a lot to me. In my last match I got a bit emotional and now, being in a semi-final, I really couldn’t imagine it after everything.

“Right now this is my lucky place. I’m so happy I am still able to play and compete with the best.”

Kvitova will face Sofia Kenin, who kept up her bid for an Australian and French Open double by winning the all-American clash with Danielle Collins.

Collins had won all three of their previous meetings, but a side injury put paid to her chances of a fourth as Kenin completed a 6-4 4-6 6-0 victory.

After a sluggish first set Collins began to impose her power in the second, and having retrieved a break forced set points on the Kenin serve.

The 26-year-old, ranked 57 in the world, took the set at the fourth attempt as Kenin’s forehand floated long.

But Collins’s serving numbers dipped dramatically in the third, and it became clear why when, at 4-0 down, she needed lengthy treatment on what appeared to be a side strain.

“I know Danielle plays really aggressive so I had to play aggressive too and take my chances. I feel like I did a really good job.”