Everything clicking for the Cleveland Browns after Cowboys thriller

Browns offence is about motion, movement and creativity - their defence isn’t bad either 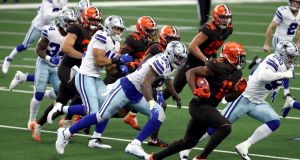 Donovan Peoples-Jones runs for the Cleveland Browns in their high-scoring win over the Dallas Cowboys. Photograph: Ronald Martinez/Getty

No matter how much they tried to give it away in the fourth quarter, the Cleveland Browns left Dallas with what felt like a season-defining 49-38 win.

This was the Cleveland that was envisaged when the core of this team came together a year ago: fast, creative and aggressive on both sides of the ball.

The Cleveland offence is all about movement and motion and creativity. It is, in the eternal words of Mike Mularkey, a form of exotic smashmouth. Getting the ball to the team’s best playmakers in space is the general idea, whether that’s on the ground or through the air. Nothing typifies head coach Kevin Stefanski’s approach more than wide receiver Jarvis Landry’s touchdown toss to Odell Beckham on Sunday.

Landry may be the best throwing non-quarterback in the NFL. Landry followed up his 63-yard dime from a year ago with a touchdown toss against the Cowboys. It was a laser, thrown on time, in rhythm, and with plenty of zip (why does it always look so much better when delivered on the run by a lefty?).

That last point is worth repeating: Landry rips it. When a non-QB throws the ball it’s usually a fluttery, lofted effort – the work of an enthusiastic amateur who was just about good enough to play quarterback in high school.

There’s nothing too complex about that Browns play. It is, in essence, a reverse running play with the running back handing the ball off to a wide receiver behind the line of scrimmage. Only rather than having Landry stick his head down to charge upfield, the Browns build in a passing option: there, sneaking in behind as Dallas’ defenders creep up towards the ball, is Odell Beckham.

That is StefanskiBall at its best: Movement, using creative concepts to free up his best players, and baiting the opposing defence into using its instincts against itself.

Cleveland came back to a similar look when the game was on the line: this time the ball was put in Beckham’s hands on an out-and-out reverse, and he rushed for a 50-yard touchdown.

This Cleveland – the fun, free-flowing, not asking too much of Baker Mayfield Cleveland – is an honest to goodness threat in the AFC. It’s not just on offence though. They’re rolling defensively, too.

Myles Garrett has ascended to the there’s-nothing-you-can-do-to-stop-him level. He is now up to an average of 0.86 sacks per game over his career thanks to a pair on Sunday. It was his third week in a row with a strip-sack. Garrett’s sack on Sunday edged him past JJ Watt and Aldon Smith in the sacks-per-game rankings by players who have played a minimum of 16 games. The only player ahead of him now? Reggie White. That’s a Hall of Fame trajectory.

With a raft of talent across Cleveland’s defence, it’s hard for an opposing offense to commit funky blocking schemes or consistent double teams to Garrett alone. Yet leave him one-on-one and there isn’t a lineman alive who can cope with his combination of size and speed for an entire game.

There was always more coherence on the defensive side of the ball, even in the groggiest days of Gregg Williams. Now that tenacity and creativity on defence is being matched by the offence.

With this confuse-and-clobber style, and game-breakers all over the field, everything is clicking for the Browns. A playoff spot is now the expectation, but an AFC North title bid is not out of the question. - Guardian