Chase in no hurry as West Indies extend advantage over England

Tourists in strong position to push on for victory in Southampton 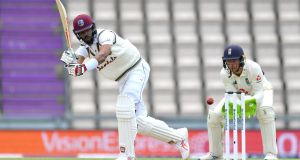 West Indies batsman Roston Chase in action during day three of the first Test against England at the Ageas Bowl in Southampton. Photograph: Dan Mullan/Getty Images for ECB

Advantage West Indies and they have worked commendably hard to gain the ascendancy. So far their discipline and determination has prevailed and it has been epitomised by Roston Chase. He only scored 47; in the 33 overs of the afternoon session he mustered just 14 runs; in all he faced 142 deliveries. Chase was content with grit rather than glamour.

He is not renowned as a 21st-century equivalent of Chris Tavare in one of his more reticent moods. But here he was set upon occupying the crease; in that afternoon session he ducked the bouncers, blocked the straight ones and refused to be tempted by the spinner. Someone else could play the shots that would have had a crowd gasping. In fact in another world Chase might have prompted a slow handclap, a response that has gone out of fashion in the 21st century.

But he did his team proud. Along with fellow Bajans Kraigg Brathwaite and Shane Dowrich he ensured a first-innings lead of 114. At the close Rory Burns and Dom Sibley hung on and England were 15 without loss. They will have to play well to avoid defeat, let alone win it. There are still 196 overs to go and much to anticipate. Despite the absence of spectators the television viewer has surely been struck by the intensity of the cricket as well as the tenacity of the tourists.

With the exception of Jermaine Blackwood, who has always been something of a wildcard, the West Indies line-up gave nothing away on the most hospitable day of the Test so far. Brathwaite and Shai Hope bedded in carefully. They were unperturbed when Mark Wood propelled an entire over in excess of 90mph, which had the stattos buzzing briefly: when did an English bowler last do that in this country? Was it Larwood? Or Tyson? Er no. Jofra Archer last summer at Lord’s in the spell that felled Steve Smith.

But the pace could not produce any wickets and after 35 minutes Stokes tossed the ball to Dom Bess, an early indication that this surface possessed fewer demons now that the sun had turned up. There was no turn for the off-spinner but just after the drinks interval Hope drove against him and edged to the captain at slip.

Soon Brathwaite posted his first half-century in 22 Test innings and he found an impressive ally in Shamarh Brooks, a newcomer who is 31 years of age. He then accelerated taking three fours from Stokes in swift succession before falling to the last ball of the over . . . just.

There was another review and despite two umpire’s calls on the screen Brathwaite had to go for 65. Brooks batted with pleasing orthodoxy and freedom and then curiously sought a review after an appeal for caught behind, which was quickly verified. Otherwise he had been remarkably composed in his first Test in England.

While Chase dug in, Blackwood, despite rumours that he has become less impetuous, was the Blackwood of old: a gorgeous cover drive off Bess, a lofted scoop against James Anderson and then a drive against the off-spinner which went straight into the hands of mid-off. It was the solitary gift for the England bowlers, not that Bess was an undeserving beneficiary.

On a surface that offered him very little assistance Bess bowled intelligently again, sometimes with enterprise by pitching the ball outside off-stump in pursuit of an outside edge, more cagily and straighter when he needed to stem the run-scoring. Moreover Stokes used him well, giving him an early opportunity but not leaving him to stew when nothing was happening. We can debate Stokes’s decisions just before and after the toss but his management of the bowlers on an increasingly well-behaved pitch could hardly be faulted.

The new man, Shane Dowrich, ensured the innings did not stagnate, as Chase stayed resolutely in his shell. He was sharp and inventive from the start as this pair navigated safely to the tea interval, after which the second new ball was available. It was taken immediately and initially there was a flurry of boundaries from the previously dormant bat of Chase as Anderson over-pitched and Archer strayed on to leg-stump.

Eventually Anderson, who was finding some fresh movement, beat the defensive prod of Chase. Umpire Illingworth kept his finger down so this time it was England’s turn to await the verdict of busy Michael Gough in the third umpire’s room. In this match there have been understandable signs of rustiness from all concerned, including the umpires. But it is no more than rustiness.

Before long there was another twist in the duel of the all-rounders. Stokes replaced Anderson and soon he banged the ball into the surface against Jason Holder, whose hook was mis-hit. Down on the long-leg boundary Archer held the catch and there was considerable elbow pumping. Dowrich, who only scored 24 runs in three Tests on his last visit to England, had now registered the second 50 of the match and he battled away to take the lead into three figures.

Now Stokes polished off the innings quickly; he bowled Alzarri Joseph, who had hit several infuriating boundaries and Dowrich was caught down the leg side from another lifting delivery. So Stokes finished with four for 42. Pace prevailed in the end as Wood demolished the stumps of Shannon Gabriel, but this dismissal hardly disguised the fact that this had been a frustrating day for England’s speedsters. – Guardian