Bjorn Borg: The impossible enigma who made tennis cool 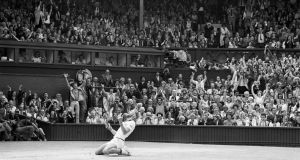 On September 13th 1981, Bjorn Borg was dismantled by John McEnroe in the US Open final. They had many classic matches; this lop-sided four-setter was not one of them. While McEnroe kissed his mother on the court in New York, Borg ducked out, escorted by seven plain-clothed police officers. He was absent from the presentation and the interviews. It is said he sneaked through the kitchens at Flushing Meadows, jumped into a Volvo and headed straight to the airport, still in his trademark Fila gear. Borg would never play another grand slam singles match. He had not long turned 25.

In a sport where it’s almost impossible to be an enigma, Borg remains one even 40 years on. Why did he quit? Why didn’t he fight – like, say, Roger Federer has done this past few years – and show he could rebuild his game, come back stronger? What demons were raging inside that beautiful head with the angelic sweep of blond hair and those tiny, cobalt eyes set just a fraction too close together?

Time has revealed a few of the answers. About others we can make informed guesses. Some, we will never know.

The end was so unexpected because of what came before. In the late 1970s, Borg dominated tennis in a way that no male player has done since. He would trounce the field at Roland Garros on clay (which was slower than it is now), tune up for a few weeks on grass, then obliterate everyone at Wimbledon (which played much faster in those days). Borg did not achieve this double once, like Federer, or twice, like Rafael Nadal, but on three occasions. His final tally was six French Open titles and five back-to-back Wimbledon championships. His stats in the Davis Cup, when these matches actually meant something, were freakishly consistent: a record 33 successive singles victories from 1973 to 1980.

Borg had a supreme, fuss-free, all-court game and brought a professionalism to the sport that it had never occurred to anyone to have. He trained in gruelling blocks of five hours and was so fit he claimed he never once felt tired during a tennis match. His resting heart rate was a whale-like 29 beats per minute. This makes sense of the iconic Wimbledon final of 1980 against McEnroe where he lost the fourth set tie-break 18-16 only somehow to bounce back and tough out the deciding set, winning it 8-6.

Borg also codified an unblinking stoicism that was later adopted by Federer (less so by Novak Djokovic and Andy Murray). You might think the “Ice Man” was born just like that, but Borg had a terrible temper growing up. Aged 12, he was suspended for six months in Sweden for his outbursts on court. Apparently, he came back reformed and made it a point of principle that he would keep his emotions in check. He became compulsive, or at least highly superstitious, about routine: always the same locker, number of towels and so on; no sex or shaving for however long he stayed in the tournament.

Tennis had never really been cool before Borg played it. He had groupies. For a horrible period, the term “Borgasm” was used. The fact that he blocked it out – blocked everything out – only added to the allure. Without Borg, Federer (as we know him) could never have existed.

So what happened on that afternoon in New York in 1981? Certainly, Borg was emotionally crushed. While winning at Roland Garros and Wimbledon came easily, he had tried and failed to win the US Open on 10 occasions, and this was his fourth setback in the final. McEnroe’s victory confirmed him as the world No 1 for 1981. Ivan Lendl was snapping at both their heels.

But there was more going on that day, and enough to suggest that Borg should not be written off as a sore loser, a man who couldn’t tolerate being usurped by younger rivals. The reason for the police escort was that Borg had received a death threat, phoned in by an anonymous male shortly before he played Jimmy Connors in the semi-final. Another death threat was made during the final, after Borg won the first set, though he only learned of it later. “It seemed like he didn’t play his game,” acknowledged McEnroe.

There’s also the wider context in which the match was played. The 1981 US Open was the last major tournament won by a male player using a standard wooden racket. Oversized, composite rackets, which could generate five times as much topspin, appeared on the Tour in the late 1970s. They required a player to change their game, making subtle adjustments to grip and footwork.

Of course, these new skills would not have been impossible for Borg – the hardest worker that tennis had ever seen – to learn. But maybe he didn’t feel like changing. It’s hard not to wonder if his own, self-imposed strictures became too onerous to endure.

Early in 1981, when he was playing McEnroe at the Volvo Masters in New York, Borg blew up at the umpire over a line call. He was deducted a point, almost defaulted; McEnroe’s expression is pure befuddlement. Having turned pro aged 16, Borg needed a release and that’s exactly what he got after he quit tennis: a sometimes chaotic life that would find him dodging bankruptcy and adjudicating wet T-shirt competitions in Stockholm nightclubs.

That was all to come, but for now let’s remember a bulletproof player, a competitive Terminator, a psychological warrior and, no question, the most stylish man ever to step foot on a tennis court. – Guardian

Atalanta hope to bring joy to Bergamo after city’s darkest hour 09:35
Madigan has Ireland caps in sight; view from Melbourne’s second lockdown 07:06
View from Melbourne: Sporting fabric of the city suffering from second lockdown 06:30
Madigan’s primary goal is Ireland caps after switch to Ulster 06:00
Seán Moran: It won’t take much before cancelling All-Ireland looks like a solution 06:00
Here is your handy guide to sport on television this week