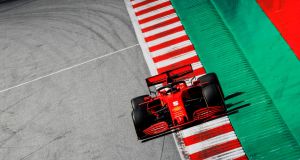 Formula One has confirmed a further two dates for its 2020 calendar, with Ferrari to celebrate their 1,000th grand prix at their home track in Mugello. F1 is still targeting holding at least 15 races this season and the announcement before the Styrian Grand Prix in Austria this weekend brings the tally to 13 with the final confirmation of the remaining meetings expected shortly.

F1 is hopeful that both events will be open to fans, making Mugello the first meeting not held behind closed doors in 2020. Tickets for the Russian GP have been advertised and the organisers have confirmed they intend to allow fans to attend.

The season will close with another triple header with two races at Bahrain and the season finale at Abu Dhabi on December 13th. A race at Portimao in the Algarve will also be confirmed in the coming weeks. The Vietnam GP remains under consideration but China has ruled out any international sporting events taking place this year apart from trials for the Beijing 2022 Winter Olympics. Austin, Interlagos and Mexico City are still in the frame but highly unlikely to take place because of coronavirus. Imola and Hockenheim are both in place to host races should they be required.

Heavy rain is expected for qualifying on Saturday and consideration is already being given to running qualifying on Sunday morning. However if the weather prevents that taking place the grid will be formed by the finishing positions in second practice.

Sergio Pérez was quickest in first practice in front of Max Verstappen with Valtteri Bottas and Lewis Hamilton in third and fourth. In the afternoon session Verstappen topped the timesheets in front of Bottas in second, Pérez in third and Hamilton in fifth. McLaren’s Lando Norris will take a three-place grid penalty for overtaking under yellow flags in FP1.

After being off the pace at the Austrian Grand Prix last week, Ferrari fast-tracked aero updates and brought a new front wing and floor to this race in an attempt to begin bridging the gap. Sebastian Vettel was 10th in first practice with Charles Leclerc in 14th. Vettel was 16th and Leclerc eighth in the afternoon.

Leclerc was given an official warning by the FIA on Friday after he broke coronavirus protocols when he returned to his home in Monaco and was pictured with friends there, outside his designated social bubble. Bottas was also investigated when he returned home but was found to have followed FIA regulations. – Guardian