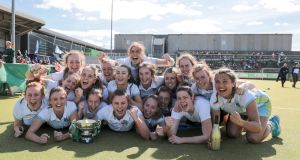 The goal came as Quins – with a player advantage after Katie Mullan’s sin-binning – pushed forward in search of a winner to end their 17-year wait for this title.

The tie was in stark contrast to their league meeting three weeks ago when UCD eked out a 4-3 win. This time, there were a similar amount of chances but not the finishing touches.

The first half was played at a frantic pace with UCD having the balance of chances. Quins arguably had the two clearest ones, Rebecca Barry denied just two minutes in Clodagh Cassin.

Olivia Roycroft’s incisive through ball located Michelle Barry and her touch to receive the ball put her through one-on-one but she blazed a wild shot over the students’ crossbar.

Another couple of corners came and went for UCD as Gillian Pinder’s floating runs gathered momentum. Roisin Upton, though, was dominating in the Cork defence with a series of robust tackles.

The second half was much more structured and chances were fewer. From the most dramatic of them, Roycroft almost had a most bizarre goal with 16 minutes to go as Cassin left the ball, believing it to be off target, before it bounced off the base of the post and across the goal line.

Three corners also went awry before UCD had their spell on top, aided by green cards for Rebecca Barry and Upton.

But it was when Mullan was sent to the bin with three minutes left that the Dublin side duly struck gold with Duke laying off for Clarke. Facing Emma Buckley, she selflessly laid off for Duke to take her time and pot the winner.