Carl Frampton believes he will be unbeatable at Windsor Park

Belfast fighter eyes up another shot at world featherweight title 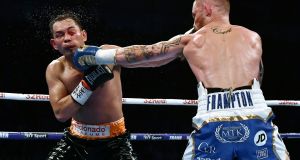 Carl Frampton lands a left to the jaw of Nonito Donaire during their WBO Interim World Featherweight championship bout at the SSE Arena in Belfast. Photograph: Charles McQuillan/Getty Images

Carl Frampton remains on track for a world title fight at Windsor Park this summer after outpointing the dangerous Nonito Donaire at Belfast’s SSE Arena on Saturday night.

The Northern Irishman is eyeing another shot at a featherweight crown, with WBO titlist Oscar Valdez on his radar as well as the winner of next month’s fight between IBF beltholder Lee Selby and Josh Warrington.

And Frampton pushed his cause with a commanding display against former four-weight world champion Donaire, who gave his opponent a couple of scares but largely came off second best.

All three judges scored the contest 117-111 – or nine rounds to three – as Frampton earned the interim WBO featherweight title.

Frampton, who improved his professional record to 25 wins from 26 fights, told BT Sport: “The only thing on my mind at the minute is Windsor Park and I can’t wait to get there.

“Everyone knows how excited I am, I can’t wait for it. There’s not a man on this planet at featherweight that’s going to beat me at Windsor Park.”

Promoter Frank Warren confirmed an outdoor event at the national football stadium is next for Frampton.

He added: “We’re going to be in Windsor Park in August and obviously all the bits will fall into place regarding who the opponent will be over the next month or so.”

Golfer Rory McIlroy was ringside as Frampton looked to bounce back from an underwhelming display against Horacio Garcia last November, his first bout with trainer Jamie Moore in his corner.

And the 31-year-old, who has won world titles at super-bantamweight and featherweight, proved that display was little more than a blip against an opponent who slumped to his fifth defeat in the paid ranks.

Donaire has been an elite performer in the lower weights for much of the last decade and the 35-year-old started well with a couple of decent body blows in an otherwise unremarkable opening round.

Frampton upped the tempo in the second with a ferocious flurry igniting the contest, and a straight right left Donaire with swelling under his left eye that worsened throughout the fight.

More eye-catching blows came from the home favourite in the third, with a couple of sharp rights finding their way through Donaire’s high defensive guard.

The fighters traded more punishing blows in the fourth when Frampton forced his foe on to the ropes, but once again it was the Belfast fighter’s punches that appeared to be more telling.

Donaire brought his vaunted left uppercut into play in the fifth although Frampton ended the round strongly before using his movement to good effect to beat his foe to the punch in the sixth.

Frampton was momentarily buzzed by an uppercut after forcing Donaire to the ropes in the seventh but responded valiantly as he traded fierce blows with his older foe.

It seemed that would be his only moment of danger as Donaire started to slow, with Frampton increasing his lead on the scorecards in the eighth, ninth and 10th.