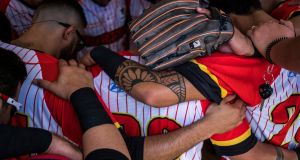 At the Estadio Hermanos Marrero, a baseball stadium nestled in this small, mountainous municipality in the centre of Puerto Rico, parts of the roof over the grandstand are gone or twisted back.

The Cayey Toritos played their 2018 home opener there in a double-header because their stadium is still too heavily damaged to use. Before the first pitch, a team prayer in the dugout led by Toritos right fielder Rafael Sánchez ended with a rallying cry, “This is for our community!”

The players are far from the millionaires getting set to play a major league game in San Juan an hour north; they are students, salesmen, barbers, teachers and cooks. And they have lived the hardships of Hurricanes Irma and Maria, yet still take the field despite the aftermath, or because of it.

The hurricanes devastated this baseball-loving island, but seven months later, the Toritos and other teams in the island’s predominant amateur 18-and-over league have provided a semblance of normalcy by pressing on with their games, even amid harsh conditions.

“Sometimes we had to wash our clothes in the river,” said Toritos catcher Raulier Martinez, 22, who was without power at home for six months.

Their determination reflects baseball’s special relationship with this island, as the Toritos and 37 other teams of the Liga de Béisbol Superior Doble A do what it has done every year since 1940: play ball.

“Doble A is more regional on the island than any other sport I can think of,” said Luis Rodríguez Mayoral, a Puerto Rican author, broadcaster and former baseball executive with such teams as the Texas Rangers and Detroit Tigers. “There are little towns everywhere on the island where people’s lives revolve around following their home team.”

Many Doble A team owners considered skipping this season, but José Quiles, the president of the Puerto Rican amateur baseball federation, urged those who could do so to play. More than a dozen teams said yes. As word spread, the number doubled, and eventually reached 38, four fewer than normal.

“We wanted people to have their oasis from the rough past several months,” said Pedro Vargas, the executive director of the league. “But this exceeded our expectations. There was a large movement everywhere.”

Including in Cayey, which, as of late January, was not going to play. Other teams would draft their players.

But the ardent fan base of Cayey, a municipality of 44,000, demanded to watch their team, which reached the semi-finals in Doble A last season. They voiced their opinions on Facebook, to team owner Héctor De Jesús, and to the municipal government, which owns the stadium the Toritos use. Players met and asked to play.

“We didn’t have a stadium, the business sponsorship wasn’t in the right shape, we didn’t know when electricity was going to come back, how many players we would have or what their economic situation was,” De Jesús said. “Everyone had to chip in and do their part to create an environment where people could forget a little bit about what’s gone on with Maria.”

Cayey’s Pedro Montañez Municipal Stadium, a $15 million, 6,000-seat stadium, was relatively new – opened in 2012 and built with central and local government funds – and a source of pride, said Mayor Rolando Ortiz Velázquez. But Velázquez said Hurricane Maria caused $2 million worth of damage, disabling the scoreboard and knocking down concrete supports and the outfield wall.

Although the main stadium was not fit for games, the first-floor concourse was in good enough shape to be used as a central base for emergency responders. The Federal Emergency Management Agency is still using that area now, fielding visits from families needing assistance. Velázquez said eight of the 22 neighbourhoods in the municipality remain without electricity.

“People sometimes think sports are a waste or just for entertainment,” Velázquez said. “But from our experience after Maria, thanks to sports and baseball, this was the best facility to co-ordinate all of our services.”

To get the Toritos, or Little Bulls, a place to play, Velázquez called the mayor of Aibonito, William Alicea Pérez, who agreed to loan his municipality’s stadium – much less affected by the hurricanes – to Cayey when the Aibonito Polluelos (Chicks) played road games. The Toritos are one of six teams playing in a loaner stadium this season, but they still practice in their normal stadium.

Vargas said the Doble A league budget is tight each year, so teams rely on local businesses to help cover costs. Jerseys are covered in advertisements from local banks and car dealerships, and the players’ introductions over the public address system are sponsored by neighbourhood supermarkets. De Jesús said those sponsorships were harder to secure this season.

To make the numbers work to run the league, officials moved opening day to April 1st from the second week of February and shaved four games off the regular season schedule, to make it 16 games. Games were moved to Sunday day double-headers, instead of the usual Friday night or Saturday afternoon games, because the lights do not work at many stadiums. Admission was dropped from $5 per game to $5 per doubleheader. Rosters grew by two, to 26 players, to accommodate the players from the four teams that couldn’t play.

The league also reduced the players’ maximum stipend – essentially gas and extra spending money – to $100 from about $300 for a weekend. Some players with professional experience, like Cayey’s Fernando Cabrera, 36, the top starting pitcher in the league who once pitched for the Baltimore Orioles and Cleveland Indians, get tips from fans on the side for winning.

“It’ll be a tougher season: double-headers, under the sun, the lower pay, the travelling,” said Richard González, 29, the Toritos second baseman. “But at the end of the day, we’re doing what we love to do, which is to play baseball and for the people of Cayey.”

The extra cash would have helped González, who started his own baseball equipment business called Dux Sports after playing college baseball at Virginia Commonwealth University. When he wasn’t drafted by a major league team, he returned to Puerto Rico and is in his eighth season playing in the Doble A.

After Hurricane Maria hit, González lost power in his home in Caguas, a city 30 minutes south of San Juan, for three months. He didn’t have a generator, mobile phone service was dead, and orders for his baseball equipment went unfilled, so he spent two months with family and his business partner in Tampa. He returned in December.

“If you play this league for the money, you don’t have a chance,” he said. “You play because of your love and passion for baseball.”

The Toritos’ manager, Edgardo Lebrón, 35, a former Minnesota Twins minor leaguer who works at a baseball academy, said his home in Las Piedras, an hour from Cayey, sustained $70,000 worth of damage and the electricity still has not returned. He has spent thousands on gasoline to feed a generator. As Lebrón stopped his front door from being blown away by the hurricane winds, he said his 10-year-old son turned to him, crying, and said, “Dad, let’s pray; we’re going to die.”

Efrain García, 55, the manager of the displaced Azucareros of Yabucoa, a small municipality in southeastern Puerto Rico hard hit by the hurricanes, said he was grateful to use the stadium in Las Piedras for home games and practice. But sharing a stadium and his players’ work schedules on Saturday, when they practice, has affected the team’s preparation. They are off to a 1-3 start. Like Cayey (3-1), Yabucoa’s fans rallied to encourage the team to play this season.

“Winning is important, but in these circumstances, it’s about more,” he said. “We want fans to be distracted for a few hours even though some are still without water or power, and give them something to enjoy that they love.”

Doble A has the humble feel of minor league baseball. Cayey’s coaches finished dressing in the dugout on Sunday. Foul balls hit into the parking lot were chased down and reused. There was a 15-minute delay in the second game because of a dispute over a player’s name on the roster. Radio broadcasters called the game from the press box, but the older men standing behind home plate essentially did the same.

“Only swing at strikes!” shouted one man nursing a beer.

In between games, players rested in the cramped lockerroom littered with equipment bags. The music of Bad Bunny, a Puerto Rican reggaeton artist, blasted from the giant speaker in the lockerroom. Some players mingled with fans in the main concourse, where fried chicken, pork and empanadas were sold. De Jesús, the owner, worked the drinks counter. Players hung their sweaty jerseys to dry so they could wear them again in the second game.

Attendance at the first game was sparse, but it probably reached 900 during the second, half of what the games get in normal times. Some loyal Cayey fans took a bus paid for by the municipality to the game in Aibonito.

“The Doble A team is the only institution in the city that unites all the Cayeyanos regardless of political affiliation or religion,” Velázquez said.

From the top row of the stands, Lucía Rivera, 65, tracked every out and hit on a homemade scorecard. A Cayey native, she brought her son, José Ramos, 44, to games when he was younger, and they continue the tradition to this day.

Power returned to their home only three weeks ago. And even though they probably had better things to do on a Sunday, they made the drive through winding one-lane mountain roads to see their beloved Toritos.

“We’ll follow them wherever they go,” Ramos said. “This is our relief from the stress. Life goes on. We have to adjust, just like the players did, and keep baseball going.” - New York Times Service