One giant leap too far: why Mo Farah can’t win the London Marathon

Athlete is up against Kipchoge in first marathon since losing 5,000m event last August 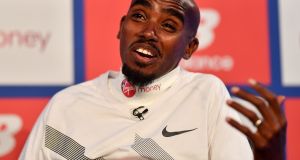 Mo Farah at a press conference ahead of the London Marathon. Photograph: Justin Setterfield/Getty Images

Among the great catastrophes of sporting predictions this already stands apart. Not long into Monday’s Boston Marathon, Yuki Kawauchi surged from the front of the lead pack, running the first mile in 4:27, bang on 2:01:02 pace and over seven minutes faster than his lifetime best.

With that NBC Sports Gold’s Larry Rawson said live on air, to millions of US viewers: “Somewhere within 5K or maybe 10, somebody is going to hand this gentleman a piano to carry.” A polite way of saying Kawauchi was about to collapse.

Given the headwind, rain and marrow-freezing temperatures – arguably the worst conditions in the 122 editions of the race – an on-screen computer then added “it was virtually impossible to win Boston if you lead the race for the first 25km”.

Kawauchi didn’t lead all of the way, but he did pass Geoffrey Kirui just over a mile from the finish, before winning comfortably in 2:15:54 – the slowest men’s winner in Boston since 1976, and among the most unforgettable. For Kawauchi, a full-time government clerk in his native Japan, with no coach or sponsors, Boston was his fourth marathon of 2018, and although he holds the record for the most sub-2:20 times in history, no one predicted he would win on Monday. Especially not like that.

He also became Japan’s first winner in Boston since 1987, when Toshihiko Seko beat all the big favourites, including our own John Treacy. Three years after winning the Olympic silver medal in LA, Treacy moved up to the marathon proper that year, quietly predicting to himself that he would win. He dropped out at 21 miles, broken somewhere around Heartbreak Hill.

A year later, deciding to run Boston only four days before, Treacy broke everyone except the African duo of Ibrahim Hussein and Juma Ikangaa, and while Hussein took the win, Treacy held on for third in 2:09.15 – which 30 years later still stands as the Irish record. No one could have predicted that.

Anyone who has run 26 miles and 385 yards – whether for the winning or the finishing of it – will know that trouble can come at you from all directions. Not just the wind blowing in your face. Boston was an extreme of all that: Desiree Linden, who became the first American women’s winner in 33 years, was about to drop out before realising she was running in third place; second-placed Sarah Sellers, an Arizona-based anesthetist who had to pay her own entry fee, wasn’t even strongly predicted to finish.

Still predicting the outcome of tomorrow’s London Marathon is a little easier, even with record-high temperatures expected all the way from Blackheath to the finish at The Mall. Because if he runs his normally perfect race then it’s hard to see him being beaten – and no, his name is not Mo Farah.

The first time I saw Eliud Kipchoge run was at the 2003 World Championships in Paris, over 5,000m: some predicted the Moroccan Hicham El Guerrouj would win, others predicted the Ethiopian Kenenisa Bekele, and we were all wrong. At age 18 and running one of his first races outside of Kenya, Kipchoge beat them both over the line, and 15 years later he’s lost none of that timing.

Since moving up to the marathon, Kipchoge’s record now stands at nine wins from 10 starts (his one defeat coming in Berlin in 2013, when team-mate Wilson Kipsang ran a then world record 2:03:23). Kipchoge won the Rio Olympic marathon in 2016 and last year at Monza race track ran 2:00:25, ruled out for record purposes because of a few little gimmicks but a superhuman effort nonetheless.

Bekele is still knocking around 15 years after Paris, his 2:03:03 marathon best officially faster than Kipchoge: defending London champion Daniel Wanjiru from Kenya is also there on Sunday, as are eight other men who have run faster than Farah’s best of 2:08:21, which he clocked in London four years ago in his first test run over the distance.

For Farah to win in this sort of company is one giant leap too far – at least for now. Sunday’s race is his first proper marathon since finishing up on the track at the World Championships in London last August, losing his last race, the 5,000m, thus ending an unbeaten championship run which had gone back to 2011, and included two double Olympic gold medals, and six World Championship gold medals.

Even by his still somewhat clouded high standards, Farah looks out of his depth here. At 35, though, certainly not ancient, he’s out to conquer the ultimate distance in time for the Tokyo Olympics, now just over two years away. Only it’s too soon to know if he can.

The British marathon record of 2:07:13, set by Steve Jones 33 years ago, is certainly within his reach, although Jones himself this week suggested Farah will always be tainted by his association – unfairly or otherwise – with distance running coaches of some disrepute, mainly the American Alberto Salazar, who single-handedly transformed Farah from mostly also-ran to mostly invincible.

Indeed, no matter how fast or how much further Farah runs into history he may never be able to completely hide from the suspicions of doping: even now after cutting all links with Salazar, and moving to Gary Lough, who coached his wife Paula Radcliffe to the women’s world marathon record of 2:15:25, set in London in 2003 (and which will safely defy all predictions for quite a few years yet).

Winning the BBC Sports Personality of the Year for 2017 suggests some people are beginning to give Farah the benefit of any doubt, the reality being that if he somehow finds a way of winning in London tomorrow it’s even easier to predict what some of the reaction will be.