1997 champion beaten 10-2 in final qualifying round in Sheffield 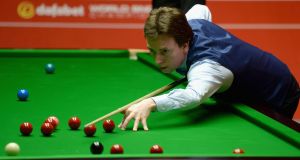 Ireland’s Ken Doherty was beaten 10-2 by Matthew Stevens in the final qualifying round for the World Championship. Photograph: Gareth Copley/Getty Images

Former World Championship winner Ken Doherty missed out on a Crucible return when he lost to Matthew Stevens in the final qualifying round on Wednesday.

The 1997 champion was beaten 10-2 by Stevens at the English Institute of Sport in Sheffield.

Welsh cueman Stevens, who has twice lost in world finals, led 7-2 overnight and swiftly wrapped up victory over the 48-year-old Irishman.

“I think a lot of people would have liked to have seen us both there,” Doherty said. “There were a few players you wouldn’t like to play in that last match and he was definitely one, because of his pedigree, his class and his experience.

“I just said to him, ‘There’s a lot of players in that top 16 that won’t want to draw Matthew Stevens in the first round’.”

Chris Wakelin, from Nuneaton, earned a Crucible debut with a 10-1 win against China’s Tian Pengfei. The tournament draw takes place on Thursday morning.