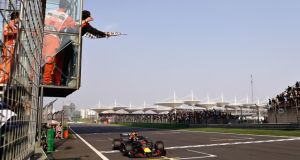 Daniel Ricciardo won the Chinese Grand Prix for Red Bull from sixth on the grid after a remarkable late charge through the field, where he took advantage of new tyres and exploited them brilliantly to take the lead and the win.

It had looked to be in Vettel’s grasp until the pit stops and a late safety car changed the complexion of the race and he was disappointed that he was clipped by Red Bull’s Max Verstappen late in the meeting which cost him further places.

Hamilton, who had been off the pace in qualifying, and did not look able to challenge for the lead may breathe a sigh of relief that he emerged with the championship deficit to Vettel reduced from 17 to nine points.

It is Ricciardo’s sixth career victory and the first time he has won in China. His last win was at Baku last season, his only victory in 2017 and it is the first for Red Bull this season.

His run had been against the odds from before qualifying. An engine problem in final practice meant he barely made it into the first qualifying session but his team worked tirelessly to fix it and got him out just in time. He rewarded them with a remarkable drive to claim the win.

Opting to set their time in Q2 on the ultrasoft tyres with which they started the race, rather than the soft chosen by the front four and taking advantage of a late safety car gave the Australian fresh rubber for the final third, which he exploited with his usual commitment and verve.

This is finally the start to the campaign the Australian wanted, after he took a grid penalty at the opening round in Melbourne and retired in Bahrain due to a power failure.

Vettel made a clean start, aggressively squeezing Raikkonen into turn one but a charge from Max Verstappen saw both the Finn and Hamilton lose a place to the Dutchman on the opening lap, with Bottas moving up to second. Out front however Vettel promptly stretched his legs and opened a gap. With the Ferrari proving to have the race pace it showed in qualifying, he was two seconds clear within three laps.

The order at the front was static until the pit stops, when Verstappen pitted for the medium tyre on lap 18, emerging behind Hamilton on track and the British driver stopped a lap later, looking for the undercut on Raikkonen. Bottas followed him after one further lap and the Finn emerged in front of Verstappen.

Ferrari however kept their drivers out until lap 21 when Vettel pitted and it proved costly. The undercut had worked for Bottas who had put in some very quick sectors and the Finn was in front of the German, who had taken a slightly longer stop of 2.8 seconds, after his stop. With the exception of Verstappen and Ricciardo the leaders were looking for a one-stop race and Bottas now had track position over Vettel.

Ferrari opted to keep Raikkonen out and he led, but on old rubber was not lapping quickly and he was caught by Bottas and Vettel. Vettel was pressuring the Finn, now caught between the two Ferraris. Bottas dealt with it decisively on lap 27 going round the outside of Raikkonen, round the outside of one and two making it stick through three and Vettel promptly followed him through.

The safety car came out on lap 31 after the two Toro Rossos clashed leaving debris on the track and it was the turning point of the race. It gave Red Bull the chance to pit both their drivers again, and crucially, fit fresh soft rubber to the end. Racing resumed on lap 36, with Hamilton up to third after the Red Bull stops.

Verstappen on new rubber tried to pass him through eight but the British driver squeezed him wide and Verstappen went off track. It was only delaying the inevitable however as Ricciardo then made a superb move to pass Hamilton, late braking into the hairpin at 14 and Verstappen then caught and passed him on lap 42.

Ricciardo was on a charge however and then swept past Vettel on lap 42 down the back straight putting him into second. Worse was to come for the German, when on lap 43 Verstappen went late up the inside of Vettel at the hairpin, but collected him on the way, causing them both to spin. Verstappen later admitted it had been his fault. It dropped Vettel down the field and Verstappen was given a 10-second penalty for the clumsy attempt.

For Vettel there was further pain when Fernando Alonso in the McLaren passed him to take seventh just two laps from the end.

Out front Ricciardo had caught Bottas on lap 44 and he dived up the inside of turn six in a breathtaking move to take the lead. He held it to the flag for a superb, deserved race win, that once again highlighted why his overtaking skills are so highly rated.

Verstappen finished in fourth but was classified fifth after his penalty. Renault’s Nico Hülkenberg was in sixth, with his team-mate Carlos Sainz in ninth and Kevin Magnussen’s Haas in tenth. – Guardian service