Late, great writer had exceptional talent and love for scribes such as Seamus Heaney 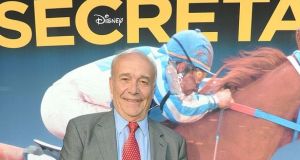 William Nack at the premiere of Secretariat in 2010 Photograph: Alberto E Rodriguez/Getty Images

For 23 months, William Nack chased the ghost of Bobby Fischer all over California. The chess grandmaster was living so far off the grid that the journalist grew desperate enough to employ a psychic named Madam Lola. To no avail.

Eventually, acting on a tip that Fischer frequented the Los Angeles Public Library, Nack began dressing like a hobo to blend in with the bums hanging around that building. Finally stumbling upon his elusive quarry late one evening by the history section, he followed him outside. Trailing behind for a couple of blocks, he tried to summon up the courage to approach, toying with the idea of faking an accent and pretending just to be a fan.

“I got right up to him; I could’ve reached out and touched him, and I realised my assignment was to find him, and I found him,” said Nack. “He looked good. He had a suit on, nice tie, kind of looked like a lawyer. So I couldn’t fake it, couldn’t bring myself to pretend to be someone else, and knew that was my ending. And it felt right to me, like it was the only thing I could do. So I let him go, and I couldn’t have written a better ending. There was broken glass all over the bus stop where he was standing.”

He is survived by his wife Carolyne, four children, six grandchildren and Pure Heart, his peerless 1990 feature on the Triple Crown-winning Secretariat

The reporter’s hunch proved right. Searching for Bobby Fischer was among Nack’s greatest journalistic hits and, following his death at 77 from cancer last weekend, the shimmering quality of his extensive back catalogue explains why so many obituaries describe him as one of America’s finest sportswriters ever.

He is survived by his wife Carolyne, four children, six grandchildren and Pure Heart, his peerless 1990 feature on the Triple Crown-winning Secretariat. Written 17 years after the epic season in which he shattered all records, Nack’s deeply personal evocation of how much the horse meant to him also captured the way the animal transformed his professional fortunes.

Following a stint in Vietnam, his career began at Newsday on Long Island where he hoped one day to rise from the local sewer beat to covering the White House. Then, there was a Christmas party where he climbed up on a desk and performed his party piece, naming every Kentucky Derby winner since 1875. A prodigious feat, it prompted the editor to ask how he’d happened upon that knowledge. Nack confessed horses were his lifelong passion so his boss reassigned him to the racetrack where, very soon, Secretariat hovered into view.

To be on the beat when history arrived was good luck but it was his dogged approach to mining the story that changed the course of his life. When Secretariat came to New York for his Triple Crown season, Nack resolved to spend every morning at the barn. For 40 consecutive days, he missed just one dawn patrol, staying home on Easter Sunday to hide eggs for his kids. The book he later wrote about the horse sold 150,000 copies, became a Hollywood movie and turned him into a national name.

Heaney, like Yeats, was among those whose oeuvres Nack read and reread so often he had committed much of their canons to memory

His talent was always underpinned by a devotion to the heavy lifting of the craft. Ejected from the press box at Tiger Stadium in Detroit late one evening for agonising too long over a baseball sidebar, he found a hot dog stand with a working light and continued typing his report up there. On another midnight vigil covering the verdict of the Mike Tyson rape trial, he delivered 800 words in 90 minutes, including an opening line that riffed on Yeats’ “its hour come round at last” from The Second Coming. When sub-editors changed round to around, he went berserk because it messed with the meter of the sentence. The obsessiveness that informed his art.

That incident took place when he had moved on to Sports Illustrated. His arrival there at the end of the seventies coincided with what historians may one day regard as the golden age of magazines, in general, and that one in particular. The decline of such a venerable institution, currently up for sale and looking past it at 64, is down to many factors. But, the departure of genuine literary heavyweights like Nack, a character at ease whether writing a minor masterpiece on Ali’s last fight against Trevor Berbick or delivering a public lecture on the works of Seamus Heaney, has undoubtedly hastened its demise.

Heaney, like Yeats, was among those whose oeuvres Nack read and reread so often he had committed much of their canons to memory. Like a literary jukebox, he could recite poems and prose on demand. At a spa in Mexico one time, an old college buddy, the film critic Roger Ebert, promoted an event billed as A Concert with Words, with William Nack. For 90 minutes, with no text to hand, he delivered reams of Shakespeare, Nabokov, Eliot, and, of course, perhaps his all-time favourite, the final page of F Scott Fitzgerald’s The Great Gatsby, the last line of which reads, “So we beat on, boats against the current, borne back ceaselessly into the past.”