Freddie Roach sidelined for what may be Pacquiao’s last fight, against Lucas Matthysse 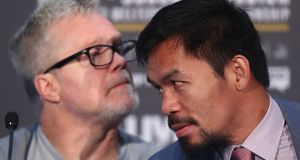 Trainer Freddie Roach and boxer Manny Pacquiao: The 39-year-old congressman has not his final decision who will be his trainer for the fight in Kuala Lumpur on July 14th. Photograph: Chris Hyde/Getty Images

Manny Pacquiao sounds like a confused fighter in the autumn of his career or, at the very least, the team around him are in disarray. Last week the Filipino force of nature appeared to sack his trainer, Freddie Roach, after 17 years and 34 fights, at the very time when he should be gearing up for what may be his farewell appearance, against the welterweight champion Lucas Matthysse. On Monday the 39-year-old congressman announced he was reconsidering his options.

“Contrary to statements which I personally did not make that are circulating in the media,” Pacquaio said, “I have not made my final decision who will be my head trainer for my 14 July fight [in Kuala Lumpur] with Matthysse.”

He added: “My adviser, Mike Koncz, has been in contact with Freddie’s people to keep them informed. I will make a final decision within the week. When that decision is made, Freddie will be the first one to be informed and then I will advise the media.”

Koncz, apparently without consulting his client, last week told ESPN: “Buboy Fernandez [an old friend of the fighter] will be handling the training on this fight. What’s important to Manny is that he has one voice to listen to in the corner that he trusts and I guess that’s Buboy for this fight.”

The on-off-on-who-knows divorce passed with little comment in the boxing community when Koncz jumped the gun – partly because these ructions are so common. But it was a significant event, nonetheless. Amir Khan was the last Roach fighter to walk – after ignoring his advice to watch out for Danny García’s left hook in the 2012 defeat that began to unravel the Bolton fighter’s career.

That was far more acrimonious than this misunderstanding. Khan intimated Roach’s Parkinson’s was affecting his ability in the gym and the corner, a claim the trainer denied – replying that Khan’s team had asked him to sack Pacquaio. Now Khan, getting ready for his first fight in the UK in five years – on Saturday in Liverpool against the 33-year-old Canadian Phil Lo Greco – has a new trainer himself, Joe Goossen, after Virgil Hunter, who followed Roach, was struck down by an unidentified illness and did not return the fighter’s calls.

Boxing often resembles a fairground carousel, with its many participants getting on and off with dizzying frequency. Nevertheless, for all that he is a tough old campaigner, Roach was surprised and offended – but gracious – when Pacquiao looked to be walking away from a partnership that began at the Wild Card Boxing gym in Hollywood in 2001. That he chose to do so without telling him first was the deepest cut.

“Manny and I had a great run,” Roach said, “longer than most marriages and certainly a rarity for boxing. I wouldn’t trade any of it. Inside the boxing ring and the political ring, I wish Manny nothing but the best.

“I would be lying if I didn’t say I wasn’t hurt that he didn’t contact me personally about his decision, but the great times we enjoyed together far outweigh that.”

They may yet patch it up but the damage has been done. When Pacquiao faces off against Matthysse, it will be nearly a year since his last fight, a points defeat by Jeff Horn in Brisbane. A career that blazed so brightly for so long is not ending well.