A wardrobe malfunction and clash of styles on the ice rink 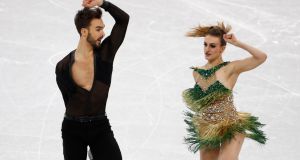 The opening of the Olympic ice-dancing competition was affected on Monday by a wardrobe malfunction that left the costume of a French gold medal contender revealingly open, causing her to become distracted and cautious.

Despite that momentary embarrassment, the results set up a showdown in Tuesday’s final between the Canadian and French couples, who present a stark philosophical contrast in style at a potentially transformational moment for the sport. Ice dancing is being energised by an inventive sense of flow and is trying to gain new respect where it was once mocked for a seeming lack of sporting legitimacy.

Tessa Virtue and Scott Moir of Canada, the 2010 Olympic champions and 2014 silver medallists, won Monday’s short dance with their season-best score of 83.67 points. Skating to compulsory Latin rhythms, they displayed characteristically brilliant musical interpretation, precise dancing to the beat and an inspired choice of music, extracting a samba from the Rolling Stones’ Sympathy for the Devil, coaxing a rumba from the Eagles’ Hotel California and summoning a cha-cha from Santana’s Oye Como Va.

Second after the short programme are Gabriella Papadakis and Guillaume Cizeron of France, two-time world champions making their Olympic debut. They scored 81.93 points despite a problem with Papadakis’s costume that revealed her breast and seemed to leave the couple somewhat unnerved and guarded. Papadakis called it her “worst nightmare”.

“It’s frustrating to miss a few points just because of a costume issue,” Cizeron said. “It’s not what you get ready for when you train. I’m so proud we managed to pull out a program like that even with a difficulty like this.”

Madison Hubbell and Zachary Donohue of the United States are third with 77.75 points heading into Tuesday’s free skate. But the gold medal is widely expected to be decided between the Canadian and French teams, who train in Montreal with the same coaches but present a marked contrast in style.

Virtue, 28, and Moir, 30, have maintained their elite international standing for nearly a decade with the speed, power, control and passion of their performances. Papadakis, 22, and Guillaume, 23, have brought an ethereal freshness to ice dancing with their seamless movement across the ice.

Descriptions of their performances, especially the Moonlight Sonata routine they will display Tuesday, venture into the rapturous:

Jackie Wong, a prominent skating analyst from New York: “You think about them being absorbed by the music. It’s like they are the music floating around the ice.”

Luca Lanotte, an Italian ice dancer who is in fifth place: “They are not even two humans; it is one thing that moves on the ice. An action of him is a reaction of her.”

In 2010, Virtue and Moir became the first North Americans to win Olympic gold in ice dancing, a sport once dominated, with some notable exceptions, by Soviet and Russian skaters.

Last week, Virtue and Moir won a second gold medal, in the team skating event. A third gold would place them among legends in the sport, alongside Gillis Grafstrom of Sweden, who won the men’s singles competition in 1920, 1924 and 1928; Sonja Henie of Norway, who won the women’s singles in 1928, 1932 and 1936; and Irina Rodnina, the Soviet pairs skater who swept three consecutive golds with two partners in 1976, 1980 and 1984.

Gold, silver or bronze would give Virtue and Moir five career Olympic medals, the most among figure skaters, though earlier generations did not have a chance to compete in the Olympic team competition, which began at the 2014 Games.

Ice dancing often does not receive the same respect from outsiders as singles and pairs skating. No throws or jumps or lifts above the head are allowed. That can make it difficult to discern between competitors based on the precision and edge control of their dance steps, unless someone makes an obvious mistake as they earn points with step sequences and permitted lifts.

The Canadian and French couples are highly regarded across the sport, given their accomplishments and fearlessly aspirational performances. Virtue and Moir carried the flag for Canada in the opening ceremony at these Games. “One thing I’ve always admired, they never seem to pay it safe,” Hubbell, the American, said of the Canadians.

For many fans of ice dancing, Jayne Torvill and Christopher Dean of Britain remain the best ever, signature innovators whose gold medal Bolero routine at the 1984 Winter Olympics remains one of the most memorable moments in figure skating.

But ice dancing is a different sport now, with a different, more objective scoring system.

“The level of dominance for Scott and Tessa over the last eight or nine years is somewhat unprecedented, especially at a time when the sport is much more merit-based,” said Wong, the skating analyst.

On Tuesday, Virtue and Moir will perform their sensual free skate to music from Moulin Rouge. As Lanotte, the Italian ice dancer, noted, the Canadians belong to a generation of dancers where “there is a conversation between the man and the woman” and the man is expected “to make her comfortable so that you can watch her.”

Seeing Virtue and Moir perform is “like reading a book,” Lanotte said. “Every moment tells something different.”

The relationship on the ice between Papadakis and Cizeron is less conventional.

“They’re more like equals,” said Anna Cappellini of Italy, who skates with Lanotte. “They speak through their movement.”

After finishing 13th at the 2014 world figure skating championships, Papadakis and Cizeron vaulted to first place in 2015 and 2016. That was once unheard-of in an event where movement upward was traditionally sclerotic and the results sometimes seemed predetermined. But scoring today is based more on performance than reputation. If Papadakis and Cizeron have not revolutionized ice dancing, they have reframed it.

“They finish, and it’s like you wake and you don’t even realise you were dreaming,” Lanotte said.

Cizeron said: “We’ve got to keep the sport modern and new. That’s what is exciting.”

The styles of the Canadian and French couples are both enthralling, Cappellini said. It will be up to the judges to choose a winner.

“No matter who were to win,” said Hubbell, “both should be considered in the best ice dancers of all time.” – New York Times