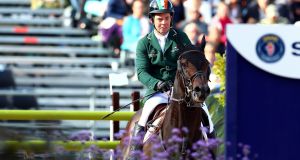 Cian O’Connor recorded Ireland’s only clear in round two with Armin Himmeleich’s Clenur at the Nations Cup in Florida. Photo: Pierre Costabadie/Icon Sport

Ireland failed to repeat last year’s victory in the Longines FEI Nations’ Cup in Ocala, Florida on Sunday when finishing joint-third with the USA behind the winners, Canada, and Brazil.

The Canadians were always in command as they completed round one on four faults, as did the Germans, while the Irish quartet, who were drawn first to jump, were lying joint-fourth on a score of 16.

In round two, Team Canada (which comprised 10-time Olympian Ian Millar (71), Eric Lamaze, Francois Lamontagne and Tiffany Foster) again picked up just four faults while, as the Germans dropped to fifth, Brazil moved up from third to second on a score of 16. Ireland had a much improved second round with eight faults resulting in a two-round total of 24.

From being first of the team to jump, Derry’s Daniel Coyle supplied the discard score in both rounds with Ariel Grange’s Cita, on which he had eight faults in round one and four in round two as did Co Offaly’s Darragh Kenny with Whiterock Farm’s Go Easy de Muze. Limerick native Paul O’Shea had a single rail down in both rounds on Skara Glen’s Machu Picchu while, having picked up four faults in the first round, Meath’s Cian O’Connor recorded Ireland’s only clear in round two with Armin Himmeleich’s Clenur.

“It was a very tough course,” commented chef d’equipe Michael Blake, Irish development team manager. “We had a few errors in the first round but we were much better in the second. Darragh Kenny was very unlucky not to jump clear just having the last fence down. You don’t win Nations’ Cups without jumping clear rounds and we didn’t jump enough of them today, but our lads never gave up and improved their position in the second round. Canada fully deserved to win and congratulations to them. We now focus on our next Nations’ Cup in Wellington, Florida where I expect we will have a very strong team.”