Ice technicians, like athletes, see the Winter Games as the pinnacle of their profession 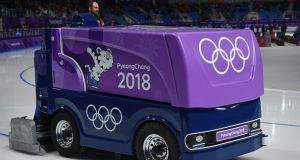 The Winter Olympics are a global competition, with athletes representing 92 countries. But one event is dominated by Americans and Canadians like no other: Zamboni driving.

It is conspicuous, this army of 37 mostly imported Zamboni drivers, doing their quiet, mesmerising work of resurfacing the ice, back and forth on their big machines, when the action pauses and the cameras turn away. “I have really good American drivers,” said Remy Boehler, an ice expert from France in charge of the surfaces for the figure skating and short-track speedskating arena and practice rinks. “For me, it is a dream team.”

Ice is hardly a foreign substance in South Korea, especially when it’s this cold, yet when it comes to making it and resurfacing it, the Pyeongchang Olympics organising committee outsourced it to foreign experts. Can’t anyone else around here drive a Zamboni? The answer is more complicated than a simple yes or no. It has to do with the small pool of Zamboni drivers in South Korea and the three men, none of them Korean, hired by the Pyeongchang 2018 organising committee to oversee the ice at the venues. Each wanted to assemble an Olympic-calibre crew.

“I look for two things: someone who is competent operating a Zamboni, and someone who wants to be part of a team,” said Mark Messer, a Canadian in charge of the ice at the Gangneung Oval, home of speedskating, and working his seventh Olympics. “We’re immersed in this – eight guys, together 16 hours a day. Unless you have good chemistry, it’s got the possibility of running off the rails.”

To keep the Zambonis running straight, Messer built his team with six Canadians and an American. As if to give their work a local flavour, they christened their three shiny Zambonis with names of things they have consumed in their rare off-hours: Pork Belly, Soju (the omnipresent Korean liquor) and Kloud (a Korean beer).

The experts say that driving a Zamboni takes more skill and experience than fans may realise, and the deepest, most-experienced pool is in the United States and Canada. “I can teach anybody to drive the Zamboni,” said Don Moffatt, overseeing a team of 16 drivers at the ice hockey arena, “but it takes many, many years to learn how to actually operate it and operate it properly”. The Olympics, he added, “are not a place to train people”.

But it is a place where the public-address system routinely plays the rink classic, “I Wanna Drive the Zamboni,” during hockey intermissions. (Let’s pause for an important lesson in ice-related nomenclature: not all ice resurfacers are Zambonis, the way not all tissues are Kleenex, but these are, with their logos concealed because of Olympic sponsorship rules. And Zamboni drivers generally prefer fancier titles, like “ice technician”, because making ice is a serious science. But they also are used to being called Zamboni drivers, and that is what their bosses here call them, and everyone loves Zamboni drivers, especially the kids, so let’s go with that. Onward.)

Zamboni is based in California, and 17 of its machines are in use at the Olympics. If the drivers were athletes, the nation of Zamboni would be the 22nd-largest contingent at the games. Altogether, 15 are from the United States and eight are from Canada. South Korea supplied nine drivers, most working the practice rinks. Five are from Japan. Only one, Barbara Bogner from Colorado, is a woman. They work for the three ice managers (often called the chief of ice or the ice meister) at four competition venues – two arenas for hockey, one for long-track speedskating and one for both figure skating and short-track speedskating.

There are also two practice rinks for hockey, a training centre for short-track and a practice rink for figure skating. Filling the roster with South Korean drivers proved difficult. South Korea has only a couple dozen rinks, organisers said, so the talent pool of top drivers is small. And no rinks have two ice-resurfacing machines. Multiple Zambonis on the ice simultaneously can be a seductive dance to watch, but terrifying to drive.

Mainly, the ice chiefs found trusted drivers by tapping into connections at home. At the figure skating and short-track speedskating sites, most drivers work smaller arenas or oversee the ice operations at recreation centres. Those at the long-track oval have specific experience in ovals, which require a more pristine sheet of ice. “It has to be absolutely perfect,” said Paul Golomski, whose job at home is facility director of Pettit National Ice Center in Milwaukee. “Thickness is critical. The amount of speed they’re carrying, the ice has to be perfectly flat.”

Every ice sport demands a different surface, with variations in thickness, temperature and hardness. At Gangneung Ice Arena, Boehler split his crew between figure-skating and short-track specialists. Figure skating requires thicker, softer ice. Short-track needs colder ice, but not too brittle that it gives way on the tight corners. Beyond the complex refrigeration systems, Zambonis are the primary tool in making the ice and keeping it in good condition, a big machine that does a lot of detail work.

“I could give you a five-minute tutorial, and you could drive the Zamboni out there,” Messer said, nodding to the huge, glassy oval. “But you’re not going to understand the effect of turning the blade up or down, which controls how much you shave, which can make or break the ice. Or how much wash water you’re using, the amount of water you’re using for flooding, where the low spots are on the rink, where the high spots are.”

Zamboni drivers, like athletes, see the Olympics as the pinnacle of their profession. The ice chiefs, fully understanding the importance of perfect ice, are putting only their top drivers on the ice during competitions. In hockey, the ultimate honour is to drive for the men’s gold medal game, but the pair has not been chosen.

Nerves have been known to overwhelm lesser drivers, like someone Moffatt worked with once at a figure skating world championship. “This one guy got on the machine the first time, full crowd, drove one lap, just about destroyed the whole ice sheet, and drove off the ice and said, ‘I’m out of here,’” Moffatt said. “Never saw him the rest of the two weeks. So you never know how people are going to react.”

Ryan Hevern of Minnesota is one of the Zamboni drivers for hockey. He learned to drive from his father, whose “claim to fame”, Hevern said, was having “his ice” appear in The Mighty Ducks movie. “He texts me every couple of nights,” Hevern said. His voice hitched. “I get choked up even thinking about it. He’s very proud.” Around and around it goes.