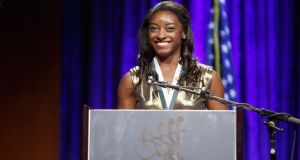 After having vocally supported her team-mates as they publicly detailed the sexual abuse they endured, Simone Biles, one of the most decorated gymnasts in Olympic history, added her own name Monday to the list of those who have accused Dr Lawrence G Nassar of sexual abuse.

“I too am one of the many survivors that was sexually abused by Larry Nassar, ” Biles said in a statement posted to Twitter. “Please believe me when I say it was a lot harder to first speak those words out loud than it is now to put them on paper.”

Nassar, a former team doctor for both USA Gymnastics and Michigan State University, where he was a faculty member, has been accused of sexual abuse by more than 130 women. Nassar, 54, was sentenced to 60 years in prison last month for a conviction related to child pornography, and he is awaiting additional sentencing after having pleaded guilty to one set of molestation charges, which could bring a life sentence. More criminal charges are likely to follow, and a group of accusers has also filed a civil case against him.

Among Nassar’s more prominent accusers are Olympic gold medallists Aly Raisman, Gabby Douglas and McKayla Maroney. Biles, who won four gold medals at the 2016 Rio Olympics, including in the all-around event, is 20 years old and still squarely in her prime as a gymnast. She mentioned in her statement that her dream was to compete at the 2020 Tokyo Games, though she lamented that it would require training in the facilities where she was abused.

Biles had been fiercely protective of her team-mates who revealed their own abuse, including during a controversy that ensued after Raisman disclosed her experience and Douglas seemed to criticise the victims before apologising and adding her own name to the list. Biles’s statement explained what caused her to wait until months later to reveal her own allegations.

“For too long I’ve asked myself ‘Was I too naive? Was it my fault?” she said in the statement. “I now know the answer to those questions. No. No, it was not my fault. No, I will not and should not carry the guilt that belongs to Larry Nassar, USAG and others.”

Raisman was quick to praise Biles’s statement in a Twitter post of her own. “I am so proud of you,” Raisman wrote. “You are incredible Simone. I stand with you.”

It was an Indianapolis Star investigation in 2016 that publicly revealed the allegations against Nassar that had led to his firing by USA Gymnastics in 2015. In September of that year, a Star report detailed the experiences of a pair of gymnasts who said that they had been sexually abused. Rachael Denhollander was named in the initial report, and Jamie Dantzscher later revealed herself as the second gymnast.

Since those initial allegations, the case against Nassar has exploded. It now includes gymnasts at all levels, with at least eight having been members of the US national team, five of whom have competed in the Olympics.

As the legal case against Nassar has expanded, there has been a great deal of criticism of USA Gymnastics as well, with several of the victims accusing the organisation of either negligence or complicity in the abuse.

In a lawsuit against USA Gymnastics, Maroney claimed the organisation had paid her to sign a nondisclosure agreement that prevented her from speaking out about the abuse; the organisation responded by saying she and her lawyer had initiated the process rather than the other way around. In March 2017, Steve Penny resigned as president of USA Gymnastics.

The decades-worth of allegations against Nassar will likely take some time to sort out, but Biles’s statement included a call for the investigation to continue until some sort of resolution can be found for the victims.

“We need to know why this was able to take place for so long and to so many of us,” she said. “We need to make sure something like this never happens again.” – New York Times