Galway teacher says nothing prepares you for the travelling, flights and lack of sleep 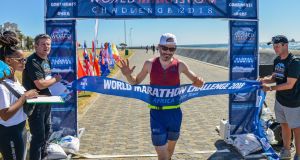 Gary Thornton will be back in the classroom at Claddagh National School in Galway on Friday morning, limping slightly, still a little tired and hungry, and happy his body has stopped eating itself alive in order to survive.

Otherwise Thornton feels no worse for the wear of running seven marathons, in seven days, on seven different continents. And actually winning all seven of them, with that taking first prize in the 2018 World Marathon Challenge.

Not his idea by the way – and clearly no ordinary event either. Especially not with an entry fee of €36,000. Yet given the obviously beastly nature of this challenge, plus the fact Thornton’s average marathon time was just over three hours, a clearly superhuman effort – in more ways than one.

I’ve known Thornton for many years: a former Irish cross-country international, and two-time national 10,000m champion on the track, at age 38 his most competitive years might be behind him, but this was a competition like no other: a race, yes, only not just against himself and the other 46 entrants but also against the jetlag, the cramp and the clock, or at least the departure time at whatever airport they were destined for next.

Starting in Novo, Antarctica last Tuesday week, Thornton has since had his passport stamped daily in Cape Town, South Africa, then in Perth, Australia, then Dubai in the United Arab Emirates, then Lisbon, Portugal, then Cartagena in Colombia, and finally in Miami in the US. Having run the full marathon distance – 42km, or 26.2 miles in old money – at each of those seven locations on the seven different continents.

“Everything about this event was stepping into the unknown,” Thornton tells me, not long before boarding one last flight from Miami back home to Galway. “And there is no way of controlling that, when you know it’s going to be so uncontrollable. And that’s exactly how it turned out.

“There is no way of preparing for it either. You can train to run 42km each day, for seven days, but you can’t train for the travelling around the world, the flights, the lack of sleep, the body rejecting food. And in the end I did feel like my body was eating itself in order to survive.

“Running a marathon straight off a long flight, as happened on a few of them, was a problem in itself. And I think if you presented that itinerary to someone, just the travel, and without any off the seven marathons, they’d still have hard enough time getting through it.

“And so many things came up that I didn’t foresee. Over 20-odd years of running I’ve actually been lucky with injuries, but I picked up more over these seven days than I did over those 20-odd years. And I actually ended up getting very little sleep, maybe an hour here and there on the plane. Usually I’d sleep fine.

“But what I’ve discovered as well that the human body is the greatest machine out there. If you’re doing something crazy it does have its limits.

But after just a few days it does recover. The human body really is incredibly robust.”

All of which begs the question – and not the how, but the why?

Running seven marathons, in seven days, on seven different continents is not actually a new challenge: but it was fellow Galway man Richard Donovan who first turned it into a business, setting up the World Marathon Challenge in 2015, having twice achieved the feat solo – in 2009 (setting a then world record time), and again in 2012.

Donovan now stages several such extreme marathon events, including the Volcano Marathon in Chile and the Antarctic Ice Marathon, which Thornton also won in 2016. Last October, Donovan came to Thornton with the idea of running his World Marathon Challenge – the main attraction being he’d sponsor his race entry (Donovan has made similar gestures before to other Galway runners and clubs).

“If you’re lucky enough that opportunities like this come your way, you have to take them,” says Thornton. “Things like this don’t fall into your hands very often. There are so many different aspects to running, and I’ve been at the high end for the last 15 years or so, trying to improve your best, make the Olympics. The runner always wants more, and this was something different, once-in-a-lifetime. Before I would put all my training output, around 100-miles a week, into one race. This was that same output for seven days, a totally new aspect to running. I was hoping to average around the three hours for each marathon, but knew too in the seven days my body was going to come under serious pressure.

“All I could do was roll with the injuries, deal with them on site. So there was a lot of self-massage on the plane, a lot of foam rolling, stretching the legs. There was a lot of fire fighting going on, especially on the last three flights. Trying to flush out the lactic acid. That worked for the first three or four days, but in the end I got just about through it. Just about.”

All entrants – 35 men, 12 women – essentially have 168 hours to finish, around 53 of which are spent in the air, crossing 16 time zones, covering some 38,000km by aircraft in between races. For the first two years, Donovan used commercial airlines; he now charters a plane solely for the race entrants and support team, which doesn’t necessarily lesson the challenge.

So with the approval of his wife Elaine (who also teaches at Claddagh in Galway), and despite missing the first birthday of their daughter Cora last Saturday, off Thornton went, taking 10 days unpaid leave from the school.

“It’s such an extreme energy output,” says Thornton. “My first marathon in Antarctica was actually my fastest, (2:58:39. But then you’re full of energy, adrenaline. Tough the nature of the surface there (ice) caught up with me on the other ones, definitely.

“The next day, in Cape Town, I was on about 2:50 pace and the heat just caught up with me. (He ran 3:06:55). The next day in Perth it was a 3.5km loop that we ran, at night time, but towards the end of that my knee jarred badly, which never happened before.

“So before going to Dubai, the next morning, I spent the whole night self-massaging my legs. And called home as well, as I hadn’t yet spoken to my wife. The fatigue was setting in, and so were the injuries.

“Into Lisbon, I felt I was compensating by running more on my left leg than the right, and then I got a left shin problem, which made it worse again. Then my left ankle gave me trouble, got badly swollen, wouldn’t fit into my runner, so everything just kept being compounded.

“Getting on the flight, you think you’ll sleep, but you don’t. My mind needed the rest, but I knew I had to keep freshening up the legs. So I just micro-managed as much as I could for the last two marathons, in Cartagena and Miami, which is why they were actually the two slowest.

“In Miami, we went straight from the plane to the course at South Beach. It was about a 5km loop, and I just couldn’t believe how long it was taking. When is this going to end? It was taking forever. And I could have actually done with a few more pounds going in, being so lean anyway, around 55kg, I dropped to 52kg by the end.

“So I wouldn’t say you enjoy it, no, because so much of it is actually just a blur. Any runner will tell you when you’re trying to get through any marathon you’re just focused on what’s in front of you, to keep going. For the last three marathons, stuff came into my head like never before, trying to keep the negative thoughts at bay. It might be just one word, one motto. While your brain is trying to get you to stop.

“And no way, I won’t do it again. I learned a lot along the way, and have loads of tips to pass on, but definitely not again, no. Right now the body feels no worse than after running a big city marathon close to your personal best. Walking down stairs backwards, that kind of thing. But part of me is still thinking did I actually do that?”