Peter Sherrard appointed as CEO of Olympic Council of Ireland 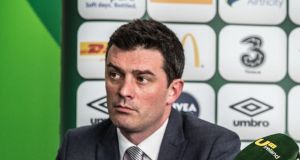 Peter Sherrard has moved from his position in the FAI to be the new CEO of the OCI. Photo: Dan Sheridan/Inpho

Former operations director of the FAI Peter Sherrard, has been appointed as the new chief executive of the Olympic Council of Ireland (OCI). He will take up the post in May of this year and comes in for current CEO Stephen Martin.

Originally from Newcastle, Co Down and a graduate of Trinity College Dublin, he is a fluent French and Italian speaker having lived and worked in both countries.

“We are very pleased that we have been successful in attracting a person of the calibre and experience of Peter to the Olympic Council of Ireland,” said OCI President Sarah Keane.

“His hands on experience and leadership skills will be of great value to us as we continue to pursue our athlete centred programme of reform. With the recent launch of our new strategy Peter is starting at a time of real growth and development for the Olympic movement in Ireland.

Sherrard comes into the OCI after the most turbulent time in its history, which involved the arrest in Rio of key members of the organisation including former President Pat Hickey. Since then the council has voted in an entire new committee and President in Keane.

“I am delighted to have been appointed CEO at this exciting time of growth and change at the OCI. I look forward to working with the Board and staff of the OCI to build on the good work of the past 12 months,” said Sherrard.

“I share the Board’s commitment to placing athletes and Federations at the centre of everything we do at the OCI. With the Winter Games currently underway in Pyeongchang and the 2020 Summer Games in Tokyo fast approaching I am committed to working with Team Ireland and our partners to help deliver world class support for our athletes.”